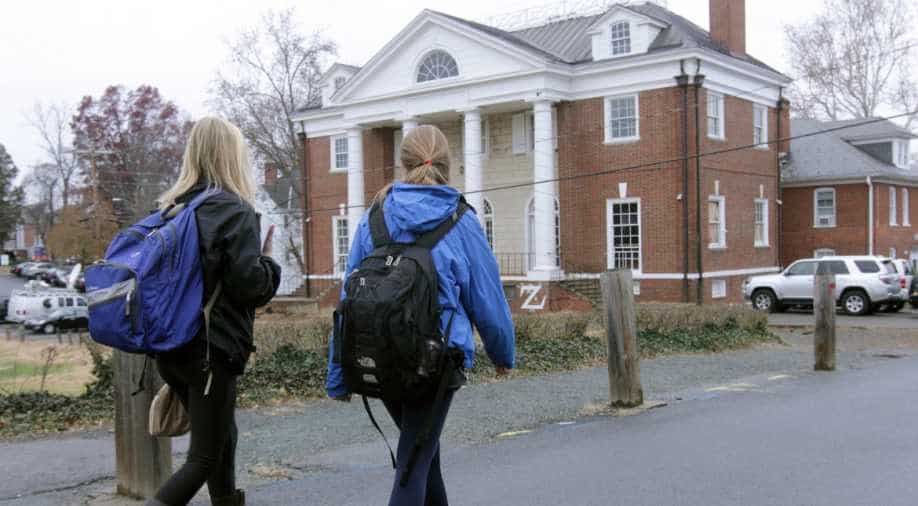 Students walk past the Phi Kappa Psi fraternity house. Rolling Stone magazine issued an apology for discrepancies that were published in an article regarding the alleged gang rape of a University of Virginia student by members of this fraternity. Photograph:( Getty )

A federal jury in Virginia on Friday found Rolling Stone liable of defaming a University of Virginia administrator by publishing a since-retracted story about an alleged gang rape at the school.

The decision followed a three-week trial in US District Court in Charlottesville, Virginia, where the administrator, Nicole Eramo, sued the magazine, owner Wenner Media and reporter Sabrina Erdely for $7.9 million. The jury returns on Monday to determine damages in the case.

It must be shown that a media organisation published what it knew to be false, or did so with reckless disregard for the truth, to prove defamation.

The magazine had reported that a female student known as Jackie was raped at a university fraternity in 2012. The story sparked a national debate about sexual assault on US campuses. Rolling Stone retracted the story in April 2015 after inconsistencies arose and police found no evidence of an attack. It was an embarrassing blow to the pop culture magazine founded by Jann Wenner in 1967.

Campus sexual assault remains a major concern, with some reports estimating that one in five female students will be victims of it during their college years.

Statistics about this subject are by definition impossible to be 100 per cent accurate, because many rapes, for different reasons, go officially unreported. Because rape is so hard to prove, victims are often unwilling to bring it forward in court. Many find it more preferable to remain silent and allow their rapist to walk than relive the trauamtic details in a public court, or have an opposing lawyer systematically attack their character.

Eramo, who was then an associate dean of students, accused the magazine of portraying her as the story's villain and focussed on hushing up sexual assault reports. She now works in an administrative role at the university.

Mark MacDougall, an attorney at New York's Akin Gump Strauss Hauer and Feld law firm, said actual malice did not mean that the defendants had to dislike Eramo or wish her harm.

"When a reporter, an editor or a magazine behave like they don’t care whether what they publish is false, that’s enough to support a finding of actual malice,” MacDougall said in an emailed comment.

In a statement, Rolling Stone spokeswoman Kathryn Brenner said: "We deeply regret these missteps and sincerely apologise to anyone hurt by them, including Ms Eramo."

A New York judge dismissed a defamation lawsuit in June brought by members of the University of Virginia fraternity, Phi Kappa Psi, against Wenner Media, Rolling Stone and Erdely. The fraternity has also sued Rolling Stone over the story.