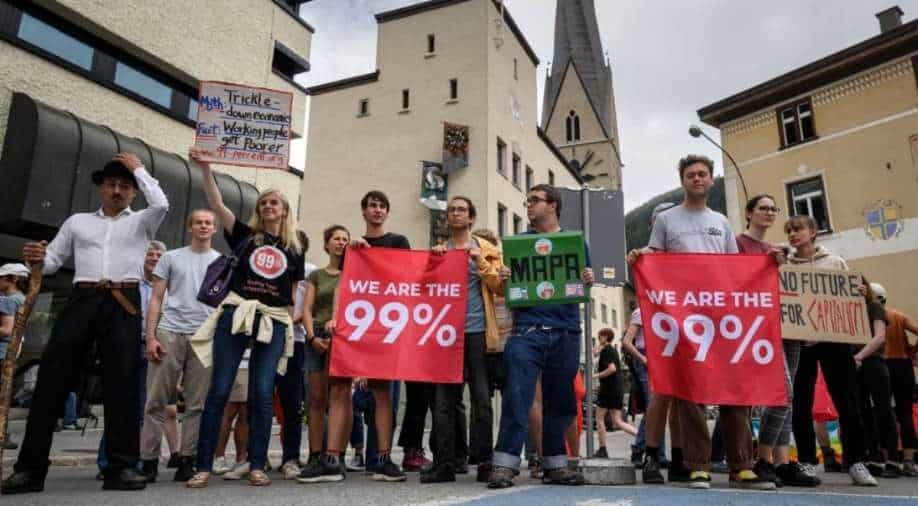 Protesters take part in a demonstration against the World Economic Forum (WEF) during the WEF annual meeting in Davos on May 22, 2022.a Photograph:( AFP )

As the global elite returned in Davos for the World Economic Forum after a two-year Covid-induced hiatus, Oxfam argued it was time to tax the wealthy to help the poor.

According to a recent Oxfam report, "Profiting from Pain," the Covid-19 pandemic created a new billionaire every 30 hours, and a million people could slip into extreme poverty at the same pace in 2022. According to the report, billionaires in the food and energy sectors are boosting their fortunes by $1 billion every two days as the cost of critical items grows faster than it has in decades.

'Profiting from Pain' is released when the World Economic Forum — the world's most exclusive gathering of the global elite in Davos — meets for the first time in person since COVID-19, a period in which billionaires' wealth has soared.

As the global elite gathered in the Swiss mountain refuge for the World Economic Forum after a two-year Covid-induced hiatus, the international charity argued it was time to tax the wealthy to help the less fortunate. Oxfam estimates that 263 million people will fall into extreme poverty this year, at a rate of one million every 33 hours, as rising prices add to the Covid issue.In comparison, during the pandemic, 573 people became millionaires, or one every 30 hours.

"Billionaires are arriving in Davos to celebrate an incredible surge in their fortunes. The pandemic and now the steep increases in food and energy prices have, simply put, been a bonanza for them. Meanwhile, decades of progress on extreme poverty are now in reverse and millions of people are facing impossible rises in the cost of simply staying alive," said Gabriela Bucher, Executive Director of Oxfam International.

"Billionaires’ fortunes have not increased because they are now smarter or working harder. Workers are working harder, for less pay and in worse conditions. The super-rich have rigged the system with impunity for decades and they are now reaping the benefits. They have seized a shocking amount of the world’s wealth as a result of privatization and monopolies, gutting regulation and workers’ rights while stashing their cash in tax havens — all with the complicity of governments," said Bucher.

The wealth of billionaires has increased more in the first 24 months of COVID-19 than in the previous 23 years combined. The combined wealth of the world's billionaires now accounts for 13.9% of global GDP. This is a threefold increase from 2000 (4.4 percent).

Oxfam's new study also finds that businesses in the energy, food, and pharmaceutical sectors — all of which have monopolies — are making record profits, despite wages scarcely moving and workers struggling with decades-high prices in the face of COVID-19. In the last two years, the fortunes of food and energy billionaires have increased by $453 billion, or $1 billion every two days. Five of the world's major energy companies (BP, Shell, TotalEnergies, Exxon, and Chevron) are producing $2,600 in profit every second, while 62 new food millionaires have emerged.