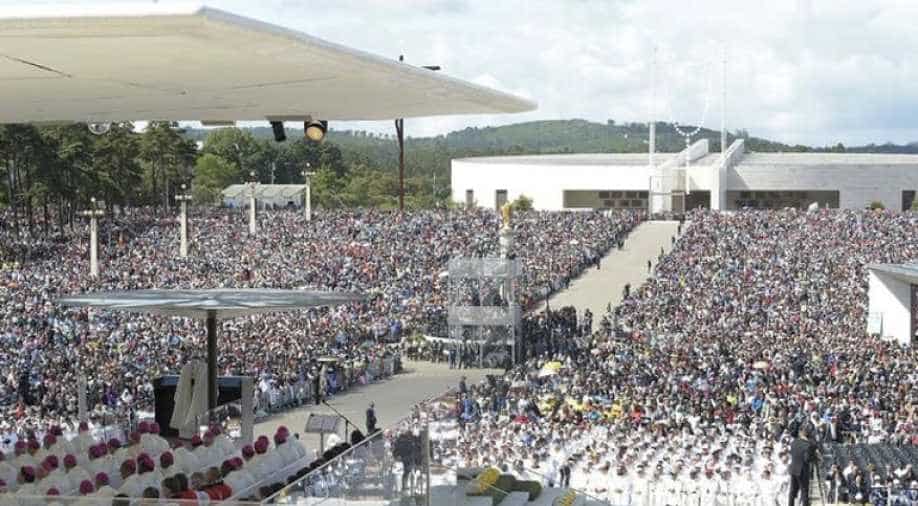 Pope Francis leads the Holy Mass at the Shrine of Our Lady of Fatima in Portugal on May 13. Photograph:( Reuters )

The story of Fatima's shepherd children has captivated Catholics since their first reported vision on May 13, 1917 ||The two died at the ages of 10 and 9 years old, within three years of the 1917 apparitions ||The Church believes the Madonna gave the siblings the so-called secrets of Fatima ||

Pope Francis gave the Catholic Church two of its youngest saints on Saturday, canonising shepherd siblings believed to have seen the Madonna 100 years ago in a Portuguese town that is now a major pilgrimage site.

Hundreds of thousands of people, many of whom slept outdoors to hold their places, broke into applause as the leader of the world's 1.2 billion Catholics proclaimed the siblings - Francisco and Jacinta Marto - the newest of the Church's saints.

The two died at the ages of 10 and 9 years old, within three years of the 1917 apparitions, making them the youngest saints of the Church who were not martyrs.

The Virgin of Fatima is venerated by Catholics around the world, a following underscored by the many national flags fluttering in the huge crowd, estimated at more than half a million.

Marie Chantal, 57, a life-long devotee, travelled more than 9,000 km (5,600 miles) from the island of Reunion in the Indian Ocean to attend the ceremony.

"I am very emotional because this pope is truly merciful and close to the people and I think he will bring us many good things," she said.

In the homily of a huge outdoor Mass, Francis prayed that the Madonna would protect the most vulnerable members of society, "especially the sick and the disabled, prisoners and the unemployed, the poor and the abandoned".

Two huge tapestries made from century-old photographs of the children dressed in the traditional peasant garb of the times hung from the church that is now the focal point of the sanctuary visited by about seven million people each year.

The story of Fatima's shepherd children has captivated Catholics since their first reported vision on May 13, 1917.

The Church believes the Madonna gave three children - Francisco and Jacinta Marto and their older cousin Lucia Dos Santos - three messages, the so-called secrets of Fatima. Dos Santos became a nun and died in 2005 at the age of 97, and efforts are underway to make her a saint as well.

The first two secrets were revealed soon and concerned a vision of hell, seen by believers as a prediction of the outbreak of World War Two, a warning that Russia would "spread her errors" in the world, and a need for general conversion to God and prayer.

The "third secret" intrigued the world for more than three-quarters of a century, inspiring books and cults convinced that it predicted the end of the world.

In 2000, the Vatican said it was a prediction of the 1981 assassination attempt on Pope John Paul on May 13, the same day of the first reported apparition in 1917.

John Paul believed the Madonna had diverted one of the bullets that hit him from his vital organs. He donated it to the sanctuary, where it is now embedded in the crown of the statue of the Madonna.

Gracinda Vieira, 57, slept outside during the chill night in Fatima to hold her place near the front of the crowd.

"It was not a great sacrifice ... it is very important for me and for the Church," said Vieira, who had travelled from her home 250 km north of Fatima in central Portugal.

"This pope is different in everything, I like him a lot. He is closer to us, the people," she said.