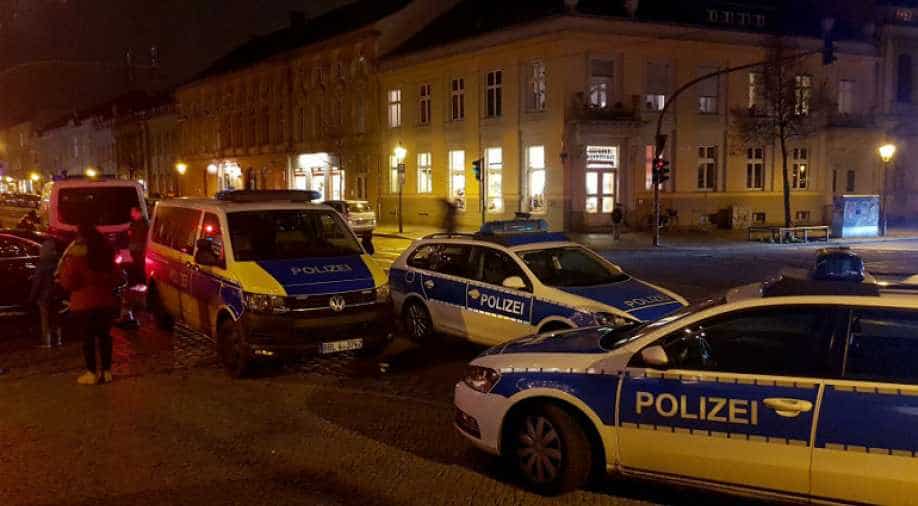 Police evacuate a Christmas market and the surrounding area in the German city of Potsdam, near Berlin on December 1. Photograph:( AFP )

After clearing parts of the Potsdam centre and Christmas market, bomb disposal units defused the device shortly before 6 pm (1700 GMT) ||Police found a canister filled with nails and powder, batteries and wires in the package, as well as a powerful firework of a type not allowed in Germany

German police on Friday were investigating a possible explosive device close to a Christmas market in Potsdam, reviving fears of a repeat of last year's terror attack that struck at the height of the festive season.

The device was uncovered in a package found at a pharmacy just off the Christmas market in central Potsdam, a picturesque city near Berlin.

Police said a pharmacist had sounded the alert after finding a canister with wires inside the package.

Investigators initially said in a tweet that "suspicions of an unconventional explosive device have been confirmed."

But Brandenburg interior minister Karl-Heinz Schroeter later said a probe was still ongoing to determine "whether the device was actually capable of causing an explosion or not."

Police found a canister filled with nails and powder, batteries and wires in the package, as well as a powerful firework of a type not allowed in Germany.

But investigators added that there was no sign of a detonator inside.

After clearing parts of the city centre and Christmas market, bomb disposal units defused the device shortly before 6 pm (1700 GMT).

Schroeter said officers were combing the area to check if other similar packages had been deposited. It was unclear whether the pharmacy or the market were the target.

"Both options are possible," he added.

What is clear is that the incident, coming on the eve of the first Advent weekend, has sparked fear.

Christmas market organiser Peter Klemm told broadcaster NTV: "It's not easy when you're on the scene, we're shocked. But the people here understand what's going on and take the measures very seriously."

Meanwhile, baker Erich Schroeter had kept his shop open for people displaced by the evacuation.

"We wouldn't just put people out into the cold," he said.

Germany has been on high alert for possible jihadist attacks after last December's deadly assault at a Christmas market in central Berlin.

The attacker, Tunisian asylum seeker Anis Amri, hijacked a truck and murdered its Polish driver before killing another 11 people and wounding dozens more by ploughing the heavy vehicle through the market.

Four days later, while on the run, he was shot dead by Italian police in Milan.

Germany has since been targeted again in attacks with radical Islamist motives.

In July 2017, a 26-year-old Palestinian asylum seeker wielding a knife stormed into a supermarket in the northern port city of Hamburg, killing one person and wounding six others before being detained by passers-by.

And at the end of October, German police arrested a 19-year-old Syrian identified only as Yamen A. suspected of planning a "serious bomb attack" using powerful explosives.

The Islamic State group claimed responsibility for a number of attacks in 2016, including the murder of a teenager in Hamburg, a suicide bombing in the southern city of Ansbach that wounded 15, and an axe attack on a train in Bavaria that left five injured.

Germany remains a target for jihadist groups, in particular, because of its involvement in the coalition fighting IS in Iraq and Syria, and its deployment in Afghanistan since 2001.

German troops in the anti-IS coalition do not participate in combat operations but support it through reconnaissance, refuelling and training.

Germany's security services estimate there are around 10,000 Islamic radicals in Germany, some 1,600 of whom are suspected of being capable of using violence.

Chancellor Angela Merkel has also come under fire for allowing in more than one million asylum seekers in the past two years, with the decision fuelling the rise of the far-right Alternative for Germany (AfD) party, which claims the influx spells a heightened security risk.