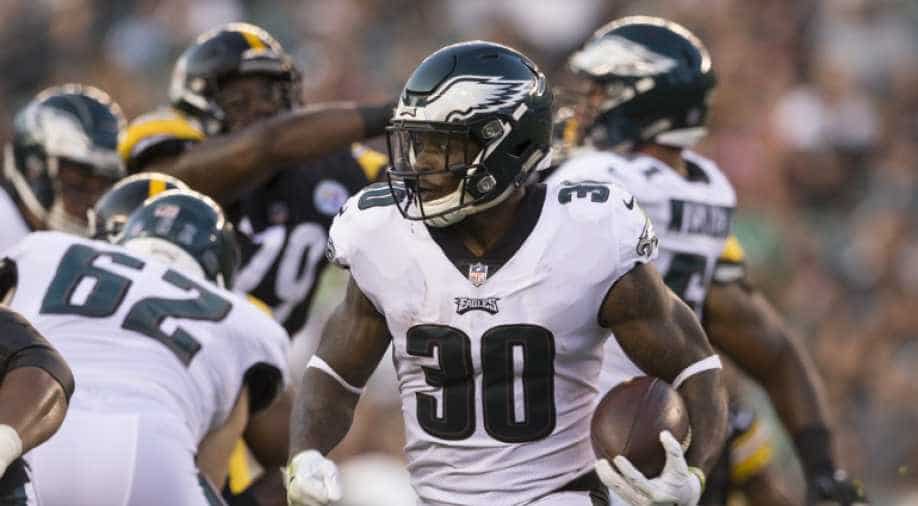 The Philadelphia Eagles (in white) take on the Pittsburgh Steelers in an exhibition game. Photograph:( AFP )

Philadelphia Eagles players Malcolm Jenkins and De'Vante Bausby raised their fists in protest during the playing of the Star-Spangled Banner prior to Thursday's exhibition game against the Pittsburgh Steelers.

The move marks a resumption of the NFL players decision to protest during the playing of the pre-game anthem in order to raise awareness about social injustice in the USA.

The NFL owners approved a new national anthem policy two months ago that requires players to stand if they are on the field during the anthem, and fines a team for any protest by its players.

The NFL decided to put a temporary hold on the implementation of that policy while it meets with the players' union to find a solution.

Dallas Cowboys owner Jerry Jones recently stated that his team would require players to stand on the field for the national anthem no matter what rule the league settles on.

Jenkins said earlier that he is afraid the other owners are allowing Jones to speak for them.

"When you have owners like Jerry Jones who speak so strongly and who has drawn his line in the sand and has been very vocal about it, and you've had other owners be very quiet, Jerry Jones is now the voice of NFL ownership," Jenkins said.

"So unless you have some other owners come out with some definitive statements and support, they're going to allow Jerry Jones to push the narrative of not only NFL owners but NFL as a whole."