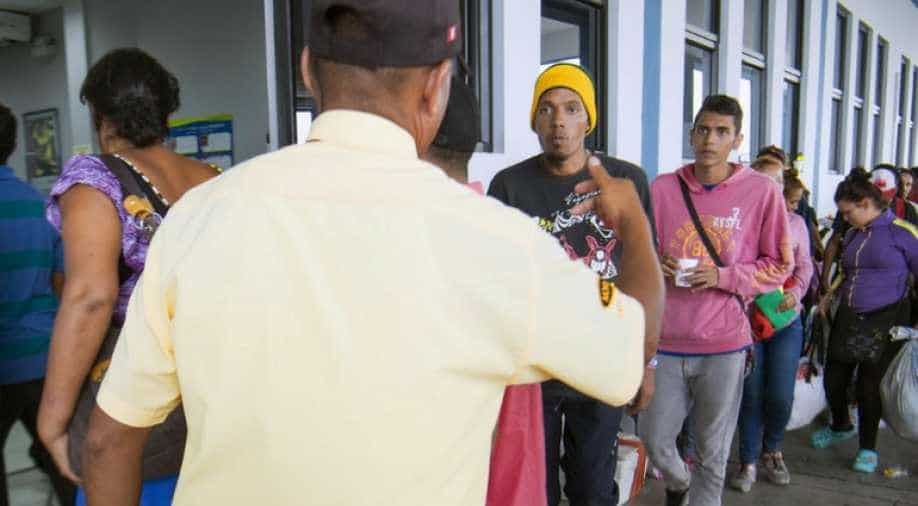 Venezuelan citizens wait in line to get a refugee application at the binational border attention centre (CEBAF) in Tumbes, Peru. Photograph:( AFP )

Peru granted asylum to hundreds of Venezuelans that missed a deadline to enter the country before new passport regulations came into effect on Saturday, as they flee poverty and shortages of basic necessities in their crisis-ridden homeland.

Venezuelans are rushing out of their homeland to join those who have already fled a deepening economic crisis, as regional governments struggle to cope with one of the biggest exoduses in Latin American history.

A rising backlash to waves of migrants prompted tougher border controls in both Ecuador and Peru -- though Ecuador later reversed course.

"Luckily, everything went well and I could get in asking for asylum," 19-year-old Alejandra Osta said as she filled out an official form at a border post in Tumbes, Peru.

By late morning around a hundred Venezuelans were queueing to enter an office to seek refugee status, while the wait for those crossing the border with passports was short.

"Here, we've been received really well," said 33-year-old Jose Luis Araujo, a teacher who had traveled more than 2,000-kilometers (1,300 miles) to enter Peru with a passport.

Before then, thousands of Venezuelans, some carrying small children and many having traveled mostly on foot, rushed towards the Peruvian border to try to beat the deadline.

Of the 2.3 million Venezuelans living abroad, more than 1.6 million have fled the country since the crisis began in 2015, according to UN figures.

The pace of departures has accelerated in recent days, sparking a warning from the United Nations.

"It remains critical that any new measures continue to allow those in need of international protection to access safety and seek asylum," UN High Commissioner for Refugees Filippo Grandi said Thursday.

Ecuador, which ended its own passport border restriction for Venezuelans on Friday, had tried to help those heading to Peru by laying on buses and opening a "humanitarian corridor."

But after the border closed at midnight, some Venezuelans, including engineering student Edison Rivas, gave up hope of reaching Peru.

"I was thinking about going to Peru but I've decided to stay here," he said, explaining that he gave up his studies and left Venezuela because "I couldn't buy a kilogram of rice, let alone pay for university."

Others got through thanks to the Ecuadoran measures.

"Thank God I'm in Peru," said 15 year-old Felipe Fernandez, who arrived with his parents and a brother.

Peru is one of the region's fastest-growing economies with 4.7 per cent growth projected for next year.

But anti-immigrant sentiment is on the rise, and stricter requirements for Venezuelans has popular support. There are already an estimated 400,000 Venezuelans in Peru.

"We're sorry for the Venezuelan people, but they are taking a job away from a Peruvian," said Giannella Jaramillo, who runs a clothes stall in Aguas Verdes, a town bordering Ecuador.

"It's hard to help more people."

Several groups have set up aid stations in the six kilometer gap between the Ecuadoran and Peruvian border crossings.

On the Ecuadoran side three large tents with 25 mattresses each were set up for Venezuelans.

Peru's education ministry set up a special tent to entertain the youngest children during their long wait.

According to the UN, up to 4,000 people have been arriving daily in Ecuador, Peru, Colombia and Brazil, where migrants have been violently turned back by locals concerned with increasing crime.

Venezuela is in a fourth straight year of recession, with double-digit declines in its gross domestic product. The inflation rate is expected to reach one million percent this year, according to the International Monetary Fund.