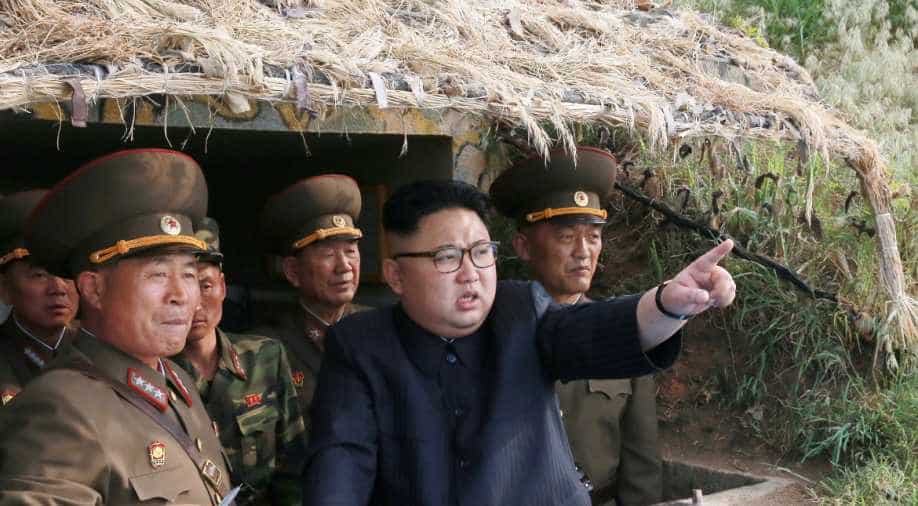 Kim Jong Un inspects defence detachments in the southernmost part of the waters off the southwest front, in this photo released by KCNA on May 5. Photograph:( Reuters )

North Korea has detained another US citizen for committing "hostile acts", it said Sunday, its second arrest of an American in a fortnight with tensions high between Pyongyang and Washington.

The arrest of Kim Hak-Song means that the North is holding four US citizens, with the two countries at loggerheads over Pyongyang's nuclear and missile ambitions.

Kim was detained on Saturday, the official Korean Central News Agency (KCNA) reported. "A relevant institution is now conducting detailed investigation into his crimes," it added.

The two-paragraph report gave no further details of the latest arrest.

But it said Kim had been working for the Pyongyang University of Science and Technology (PUST) -- an institution founded by evangelical Christians from overseas and opened in 2010, which is known to have a number of American faculty members. Pupils are generally children from the North's elite.

Kim is the second of its personnel to have been detained in as many weeks.

Accounting professor Kim Sang-Duk, or Tony Kim, also a US citizen, was held on April 22, the North confirmed last week, for trying to "overturn" the regime.

He was detained at the capital's airport as he tried to leave the country after teaching for several weeks at the university.

KCNA said he had been held for "committing criminal acts of hostility aimed to overturn the DPRK", using an abbreviation for the country's official name.

Using similar phrasing to Sunday's dispatch, it added that Kim was "under detention by a relevant law enforcement body which is conducting detailed investigation into his crimes".

PUST officials could not immediately be reached for comment by AFP in connection with Saturday's arrest.

In a statement in late April the university said Tony Kim's arrest was "not connected in any way with the work of PUST".

Pyongyang is engaged in a tense standoff with the administration of new US President Donald Trump over its banned missile and nuclear weapons programmes.

The North, which is widely seen as making progress towards building a rocket capable of delivering a nuclear warhead to the US mainland, has carried out a series of missile launches this year. It has also warned that it could carry out a sixth nuclear test at any time.

But no blast took place during symbolic anniversaries in April, and its key ally and diplomatic protector China has urged restraint.

Trump has suggested military action could be on the table but has softened his message more recently, saying he would be "honoured" to meet Kim Jong-Un under the right conditions.

North Korea has arrested and jailed several US citizens in the past decade, often releasing them only after high-profile visits by current or former US officials or former US presidents.

Two more US citizens -- college student Otto Warmbier and Korean-American pastor Kim Dong-Chul -- are currently being held in the North after being sentenced to long prison terms.

The pastor was sentenced last year to 10 years of hard labour for spying. Warmbier was sentenced to 15 years in 2016 for stealing a propaganda material and for "crimes against the state".

The claim came just months after Kim's half-brother was murdered by two female agents at Kuala Lumpur airport using a banned nerve agent, in a killing widely blamed on Pyongyang.