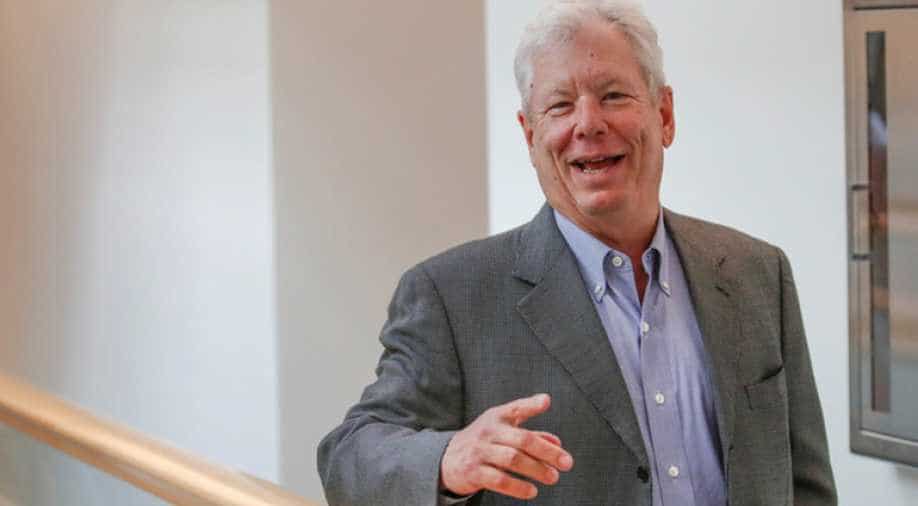 He was awarded a Nobel prize Monday for his work showing economic and financial decisions are not always rational, but mostly human.

So it seems fitting that US economist Richard Thaler, 72, says he wants to spend his $1 million winnings "as irrationally as possible."

In awarding the prize, the Royal Swedish Academy of Sciences praised Thaler for bringing behavioral economics into the mainstream -- exploring the impact of psychological and social factors on individual or group decisions in the economy and financial markets.

Thaler told a press conference at the University of Chicago, where he teaches, he was "very much asleep" when he received the 4 am phone call informing him he had won.

"I had a pretty good idea what that might be," he admitted, joking: "Unlike Bob Dylan, I do plan to go to Stockholm."

Dylan kept silent for weeks after he was awarded last year's Nobel prize for literature, although he eventually did accept the prize in the Swedish capital.

A professor at the University of Chicago Booth School of Business, Thaler was described by the Nobel jury as a pioneer in his field.

He is well known for co-founding "nudge" theory --  which demonstrates how people can be persuaded to make decisions that leave them healthier and happier.

His book on the theory -- co-authored with legal scholar Cass Sunstein -- became a bestseller, influencing governments and companies with its original solutions to savings, consumption and public health issues.

Meanwhile, his notion of "paternal libertarianism" also became a point of reference for politicians, particularly under the Obama administration, during which Sunstein was a regulatory tsar.

The theory is based on the idea people make financial decisions by focusing primarily on short-term impact -- and is used to encourage people to, for example, pay for parking spaces or get vaccinated.

Thaler also coined what he called the "possession factor," which shows people have an aversion to loss, prioritizing what they already have -- even if its value has deteriorated.

This results in financial decisions which are not always beneficial, such as putting off saving or investing when prices are rising.

The field of behavioral economics has another Nobel Prize winner in Milton Friedman, who won in 1976 -- having upset classical economic theories arguing individuals act only in their best interests.

And Thaler acknowledged his work, too, has not always been warmly received.

"Economists don't do a lot of embracing," he said Monday, adding he does not believe he "changed anybody's mind in 40 years."

His work on "bounded rationality" -- the concept that decision-making is affected by information, cognitive and time limitations -- was rewarded in 1978.

Meanwhile, in 2002, American-Israeli psychologist Daniel Kahneman -- a colleague and co-author of Thaler -- was awarded the prize for research on behavioral finance.

Other economists in the field recognized by the Academy include Angus Deaton, winner in 2015 for his analysis of consumption, poverty, and welfare, and Robert Shiller in 2013 for his work on psychology's influence financial markets.