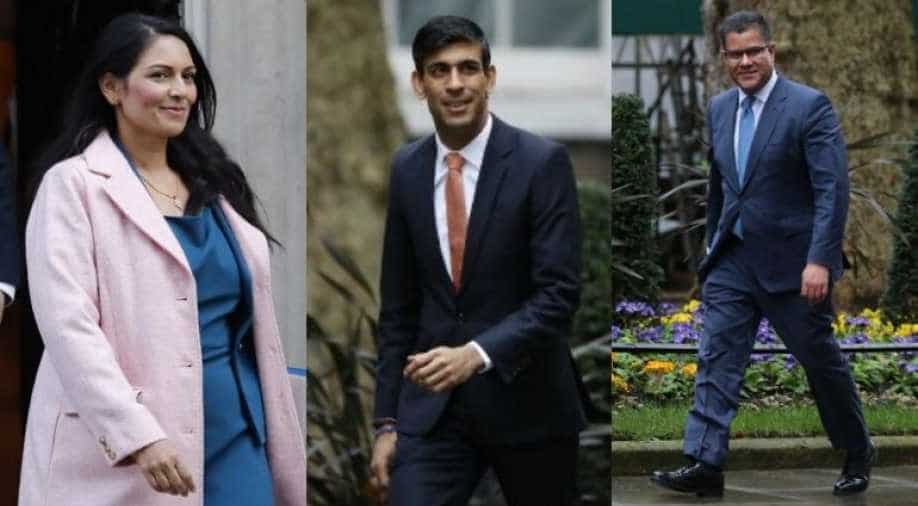 These three leaders are bound together by another commonality they were huge 'leave' campaigners during Brexit.

There has been a major cabinet re-shuffle in the United Kingdom. Three Indian-origin legislators now form the top-3 of PM Boris Johnson's cabinet.

On Thursday, Rishi Sunak was appointed the chancellor to the exchequer, which is equivalent to a finance minister in most governments across the world.

Rishi hails from a Punjabi family in Southampton and has served as a junior minister to the former finance minister Sajid Javid. Javid's sudden exit resulted in Sunak's elevation to the position.

In India, he is mostly known as the son-in-law of Infosys co-founder Narayana Murthy. In his new position, Sunak will move into number 11 Downing Street right next door to PM Boris Johnson.

Rishi has previously worked at Goldman Sachs and has also co-founded a global investment firm. Sunak's most pressing engagement will be presenting the UK's budget next month.

In a Twitter post soon after his appointment, Sunak emphasised on the great rapport he shared with his predecessor Sajid Javid and promised to build on his great work.

I am honoured to be appointed as Chancellor of the Exchequer.

My predecessor and good friend Saj did a fantastic job in his time at the Treasury. He was a pleasure to work with and I hope to be able to build on his great work going forward.

The second big appointment was Alok Sharma as the secretary of business and energy departments. He was born in Agra and moved to the United Kingdom at the age of 5. Sharma's biggest challenge will be at the UN climate summit to be held in November this year where he will assume the role of summit president.

In the summit, countries are expected to bring forward plans to cut emissions as part of the Paris agreement, however, very few have produced a concrete roadmap. There will be pressure on Alok Sharma to produce results coming November.

Priti Patel meanwhile has retained the home department. She is a second-generation immigrant from India and has been serving as the home minister since July last year.

A self- confessed follower of the 'Thatcher doctrine', Patel entered politics as a teenager and was elected to the House of Commons in 2010.

Other than their Indian origin, these three leaders are bound together by another commonality, they were huge 'leave' campaigners during Brexit and have been unequivocal supporters of Boris Johnson's policies.