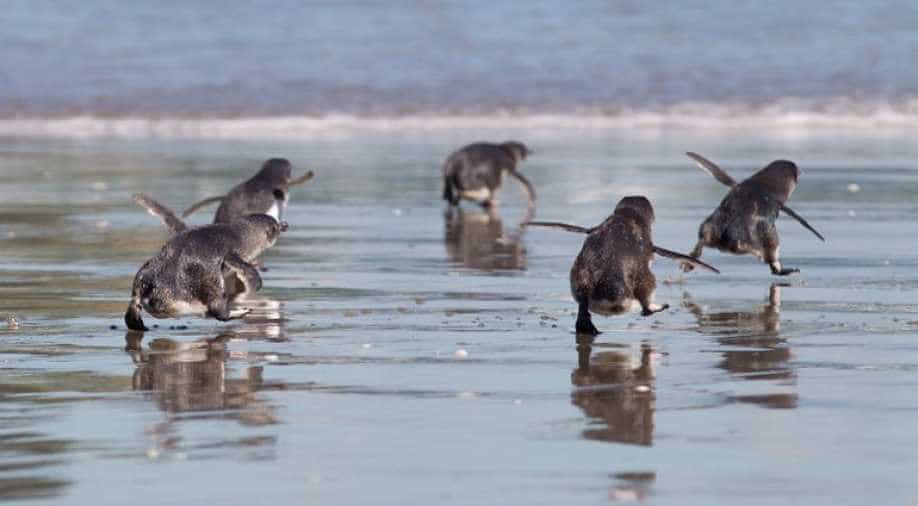 The little blue penguins are more comfortable at sea than on land. (Representative image) Photograph:( AFP )

Penguins residing in New Zealand's Oamaru can now avoid human traffic, thanks their very own underpass built for them by the town council, local tourism body and the civil works department.

The underpass is a first for the blue-feathered korora who fish at sea but nest on the land, in this colony by the Oamaru Harbour, having to cross a cross a busy road to get to their chicks once the sun goes down, CNN reported.

Hundreds of little blue penguins nest in boxes at the colony where special lighting is in place to allow the reclusive birds to be observed by visitors. They're more comfortable at sea than on land, where the perils of cars, dogs and humans await, CNN reported.

The area is also a popular destination for tourists, who flock to see the birds, with a height of less than 30 centimeters and weighing around a kilogram.

The tunnel below the road, was originally conceived by marine biologist Philippa Agnew, a researcher at Oamaru's Blue Penguin Colony after the population of the birds began to decline because of human activity, CNN reported.

White light from cars often blinds the birds, making the road between the sea and colony "potentially hazardous" for them, Gaskill said. "There was potential danger there, so what we wanted to do was create an environment where people, penguins and vehicles could move freely."

The underpass took around three weeks to build and was completed in September, CNN reported.

Gaskill said the feedback since then had been "almost universally positive," and most importantly the birds had taken to it, with up to 20 ducking below the road each night.

"Penguins are quite habitual, so once they've discovered that there's a safe route they'll tend to use it."