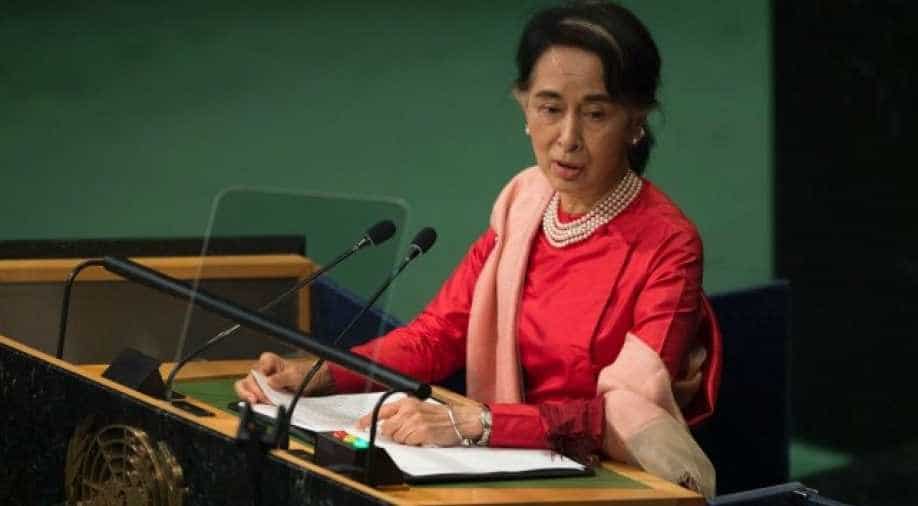 In her first address to the Buddhist-majority nation on the Rohingya crisis on Tuesday, Suu Kyi did not however touch upon the UN's accusation?of 'ethnic cleansing by the security forces'. Photograph:( DNA )

Myanmar's de-facto leader Aung San Suu Kyi has rejected the idea that she is soft on the country's military.

Suu Kyi had for the first time on Tuesday, in her state of the union address, condemned rights abuses on the Rohingya Muslims in Myanmar's Rakhine state.

According to Reuters, in her first address to the Buddhist-majority nation on the Rohingya crisis, she did not, however, touch upon the UN's accusation of "ethnic cleansing by the security forces".

Rakhine state has been the focal point of the Rohingya crisis.

Almost 421,000 Rohingya Muslims have fled the state over the last one month and are currently seeking refuge in Bangladesh.

As reported by Reuters, Suu Kyi was quoted in an interview with Radio Free Asia, speaking on whether she has softened her stance on the military, which she challenged for years in her campaign for democracy.

She added, "Our goal has been national reconciliation from the very beginning. We have never criticised the military itself, but only their actions. We may disagree on these types of actions

"We’ll continue to bring changes within the parliament. I’ve stood firm with the military before, and still do now."

Suu Kyi is the daughter of Myanmar's independence leader who founded the army and has for years been known in the West as a champion of democracy during years of military rule and house arrest.

But of late, the Nobel Peace laureate has faced growing criticism for not speaking out about abuses faced by the Rohingya.