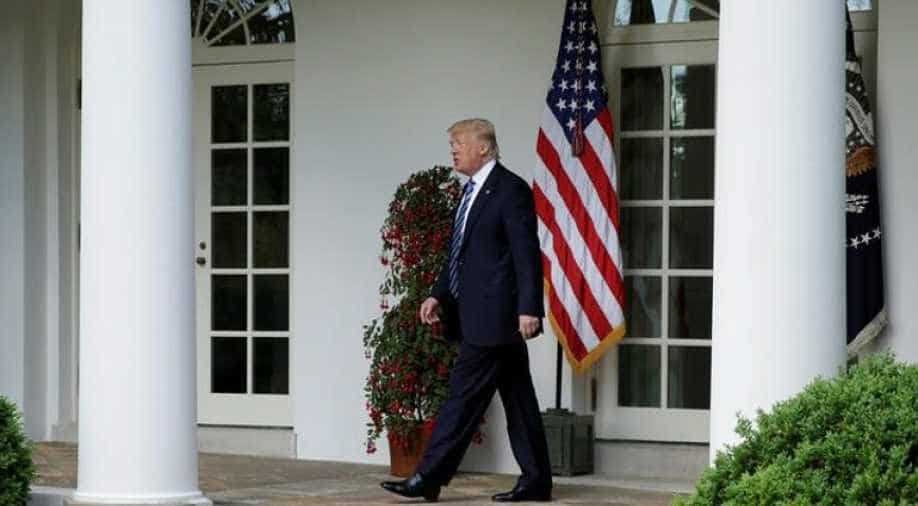 US President Donald Trump walks to the Oval Office of the White House in Washington on May 2. Photograph:( AFP )

President Donald Trump took the unusual step of advocating a shutdown of the US government Tuesday, after
Republicans and Democrats reached a budget deal that ignored key White House demands.

After Trump's fellow Republicans in Congress jettisoned his promise to build a border wall and cut
environmental spending, the embattled president lashed out, saying maybe the government should not be
funded at all.

Previous shutdowns have cost the US economy tens of billions of dollars and seen federal services grind to a
halt, as thousands of non-essential personnel are temporarily laid off.

Trump's outburst came amid a rocky few days for his young presidency.

His latest crack at health care reform is also faltering in Congress and a series of presidential media interviews
have roiled markets, allies and -- thanks to controversial comments about the American Civil War -- some
historians.

But Trump appeared especially angered by the perception that the White House and the Republican majority on
Capitol Hill had been rolled in a deal with Democrats to fund the government until September.

"Our country needs a good 'shutdown' in September to fix mess!" Trump tweeted, lamenting the need for
bipartisan compromise.

Trump also called for a change in rules that require 60 votes in the Senate to pass such measures -- a threshold
that makes party compromise necessary.

"The reason for the plan negotiated between the Republicans and Democrats is that we need 60 votes in the
Senate which are not there! We... either elect more Republican Senators in 2018 or change the rules now to
51%," Trump tweeted.

The reason for the plan negotiated between the Republicans and Democrats is that we need 60 votes in the Senate which are not there! We....

either elect more Republican Senators in 2018 or change the rules now to 51%. Our country needs a good "shutdown" in September to fix mess!

That would substantially change US politics, making budgets more partisan and poisoning what is left of inter-
party cooperation.

His view appeared to be backed by Republican Senator Lindsey Graham who said: "I think the Democrats
cleaned our clock. There are things in this bill that I just don't understand. This was not winning from the
Republican point of view."

Trump could, if he wished, veto the Republican-Democrat deal, which is still being finalised in Congress and has yet to land on his desk.

But in later Rose Garden comments, Trump appeared once more to embrace the agreement, calling it a "clear
win" for the American people and a "victory under the radar" for Republicans.

"We didn't do any touting like the Democrats did," Trump said, flanked by a trophy-winning Air Force sports
team.

Echoing Republican allies, Trump described the deal as "a very important thing for the men and women of the
United States military."

The $1.2 trillion agreement would increase military spending by $25 billion, or 4.5 percent, above fiscal year
2016 levels.

It also funds an authorized 2.1 per cent pay raise for the military.

Republicans have also hailed the $1.5 billion in funding for non-wall security efforts along the nearly 2,000-mile
(3,218-kilometer) border with Mexico.

Senate minority leader Chuck Schumer said "bipartisanship is best summed up by the Rolling Stones, 'you
can't always get what you want.'"