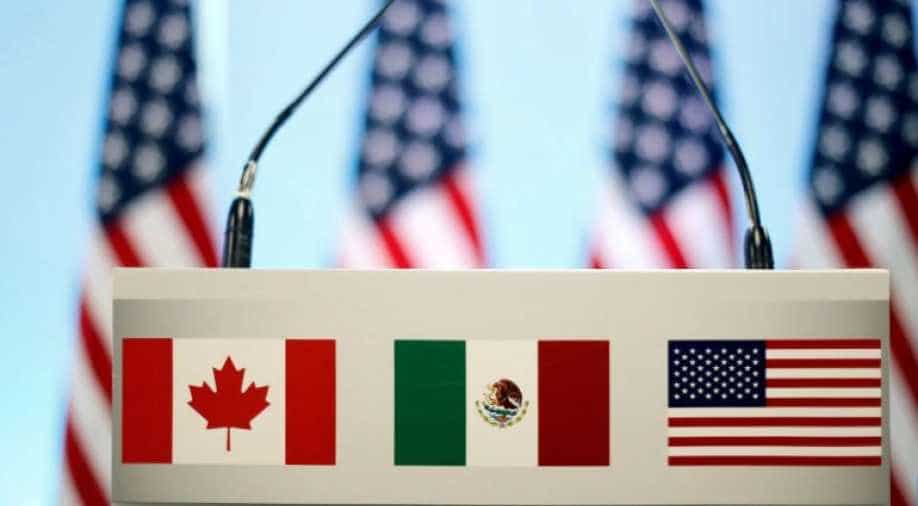 The flags of Canada, Mexico and the U.S. are seen on a lectern before a joint news conference on the closing of the seventh round of NAFTA talks in Mexico. Photograph:( Reuters )

Talks to rework NAFTA, which underpins the bulk of foreign trade in North America, have ground on for more than a year.

Agreement between Mexico and the United States on outstanding bilateral issues in renegotiating the North American Free Trade Agreement (NAFTA) could be just a few hours away, Mexican officials said on Wednesday.

"We hope that we'll have a solution in the next couple of hours, or the next couple of days," Mexican Economy Minister Ildefonso Guajardo told reporters before entering US&nbspTrade Representative Robert Lighthizer's Washington offices for NAFTA talks.

The Mexican peso rose against the dollar after his comments.

A representative for Lighthizer's office said there was no deal yet and that "major issues" remained outstanding on NAFTA, even as Mexican private-sector representatives were flying to Washington in anticipation of news of a breakthrough.

Since restarting last month, the talks have focused on settling differences between Mexico and the United States that go to the heart of US&nbspPresident Donald Trump's complaint that NAFTA has hollowed out US&nbspmanufacturing to Mexico's benefit.

Trump has threatened to dump the 24-year-old accord if it is not reworked to the advantage of the United States. He hopes to reduce the US&nbsptrade deficit with lower-cost Mexico and claw back jobs, particularly in the automotive industry.

Although progress has been made on the automotive question in recent weeks, other issues, including a US "sunset" proposal that could kill NAFTA after five years, remain unresolved.

Guajardo's comments were echoed by Jesus Seade, designated chief negotiator of Mexican President-elect Andres Manuel Lopez Obrador, who said the two sides were making "good progress" and that talks could conclude "in the coming hours."

Canada has been waiting for the Mexican and US&nbspteams to reach common ground on autos before rejoining the negotiations.

US&nbspand Mexican officials say they will push for a deal on reworking auto industry rules that could open the door for Canada to return to the negotiations.

Guajardo said the talks would seek to resolve the key issues so that Canada could rejoin the talks. How quickly Canada returns to the table would depend on the progress made in Wednesday's talks, he said.

Canadian Foreign Minister Chrystia Freeland said her government was in "very close contact" with her Mexican and US&nbspcounterparts.

"We are encouraged by the optimism that both countries have, and we are optimistic as well," she told reporters outside a Cabinet meeting in British Columbia on Wednesday.

Though NAFTA is a trilateral deal, Freeland noted that many issues were chiefly bilateral, which is what she said the United States and Mexico were concentrating on.

Much of the negotiation has focused on revising rules of origin for autos to try to bring more production to the region.

The United States and Mexico are close to a deal to increase North American automotive content thresholds, with substantial requirements for content produced in high-wage areas, according to officials and industry sources close to the talks.

Freeland said auto rules of origin were also important to her government, and that "Canada will very much have a voice in the finalization of all of this."

Bosco de la Vega, head of Mexico's main farm lobby, said he and other top private-sector representatives were travelling to Washington in anticipation of a possible US&nbspannouncement on Thursday that Mexico and the United States had reached a deal.

If that occurs, it would be up to Canada to decide whether it could accept what the two sides had agreed, said de la Vega, president of the National Agricultural Council.

"What the Mexican private sector and Mexico's government want is for this to be trilateral," he said in an interview.

Still, a half-dozen auto executives told Reuters it is unlikely a deal will be reached with Mexico by Thursday, pointing to the issues yet to be settled and Mexico's hesitation about having an agreement announced without Canada.

Irrespective of whether such a deal occurs, the automakers said they believed talks would likely go into next week for remaining issues to be resolved between the three countries.

Talks to rework NAFTA, which underpins the bulk of foreign trade in North America, have ground on for more than a year. Discussions stalled ahead of the July 1 Mexican election as negotiators failed to make a decisive breakthrough.

Aside from autos, the three sides have yet to agree on future dispute-resolution mechanisms, while Mexico and Canada also oppose the US&nbspdemand to introduce a "sunset clause" that would force a renegotiation of NAFTA every five years.

Mexico and Canada fear such a clause could be a major hindrance to long-term investment.