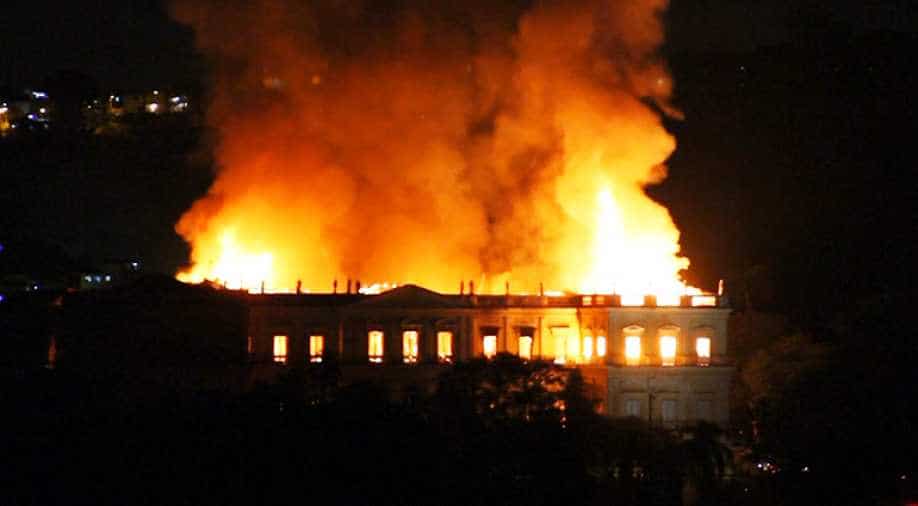 A 200-year-old museum in Rio de Janeiro was hit on Sunday by a massive fire, images from television station Globo showed, threatening its collection of more than 20 million items ranging from archaeological findings to historical memorabilia. Photograph:(Reuters)
Follow Us

A massive fire engulfed the National Museum of Brazil in Rio de Janeiro which is one of the oldest museums of the country.

So far there is no reported casualty, however, there has been major damage to priceless artefacts and exhibits.

The fire broke out after visiting hours and quickly spread to the whole building. News agency Reuters says it is still appeared to be growing.

As per the media visuals, the fire seems to be massive with raging blaze.

"This is a tragic day for Brazil," President Michel Temer said in a statement.

"Two hundred years of work and research and knowledge are lost."

"This is a cultural tragedy," the director of the National History Museum said on television.

Several firefighters are still trying to take the fire under control. They have also issued a warning to nearby locals that building could collapse.

The 200-year old museum was founded in 1818 by King Joao VI and is among Brazil's most important, with valuable national treasures inside. It houses several landmark collections including Egyptian artefacts and the oldest human fossil found in Brazil.

It also has a major scientific library containing over 470,000 items including 2,400 rare works.