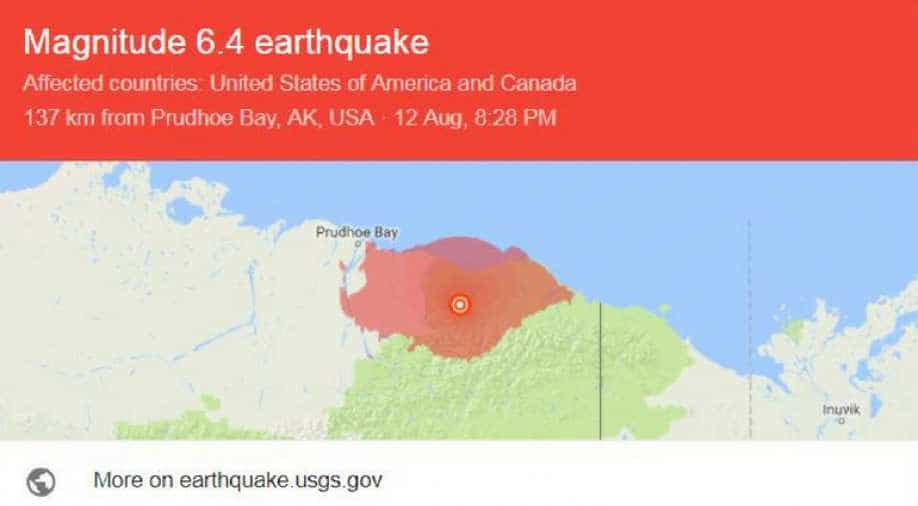 The temblor was the most powerful on record to hit Alaska's oil-producing North Slope. Photograph:( Others )

A magnitude 6.4 earthquake struck on Sunday near the native Alaskan village of Kaktovik and part of the Arctic National Wildlife Refuge where the Trump administration plans to allow oil drilling, but no injuries or damage were reported.

The temblor, which occurred just before 7 am (1500 GMT), was the most powerful on record to hit Alaska's oil-producing North Slope, said Paul Huang, a seismologist and deputy director of the National Tsunami Warning Center in Palmer, Alaska.

No tsunami alert was generated, though the ground motion was felt as far away as Fairbanks, Alaska, nearly 400 miles (644 km) to the south.

The quake had no impact on operations of the Trans Alaska Pipeline system that carries North Slope crude 800 miles (1,300 km) to the marine terminal at Valdez, according to a statement from Alyeska, the consortium that runs the pipeline.

Alyeska said it would conduct follow-up inspections of the pipeline and related facilities. Inspection teams likewise found nothing amiss at the Prudhoe Bay oil field about 85 miles (137 km) to the east, said Megan Baldino, a spokeswoman for BP Exploration (Alaska) Inc, which operates the field.

The quake, initially measured at a magnitude 6.5, was followed by a series of aftershocks, the largest of which was a 6.0 tremor, according to the US&nbspGeological Survey.

The main earthquake was centred 40 miles (64 km) southwest of Kaktovik, a coastal Inupiat village of about 260 residents at the northern edge of the Arctic National Wildlife Refuge (ANWR).

State emergency officials said they had no reports of damage, but locals in Kaktovik said the tremor did not pass unnoticed.

"I felt a little shaking and felt dizzy, and felt the shelves shaking," said Archie Brower, assistant manager at the Kaktovik Kikiktak grocery.

The epicentre also lies near an area the US&nbspInterior Department plans to lease for petroleum exploration along ANWR's coastal plain, which had been off-limits to fossil fuel development until a provision was enacted as part of President Donald Trump's 2017 tax bill.

The vast and environmentally pristine coastal plain, wedged between the Beaufort Sea and Brooks Range mountains, is prized for its importance to caribou, polar bears and other wildlife but is believed to hold billions of barrels of oil.

"Scientifically, however, this region is poorly understood and the behaviour of the fault or faults responsible for today's earthquake are not known," the Alaska Earthquake Center in Fairbanks said in a bulletin.

Strong earthquakes are not uncommon in seismically active Alaska, but they tend to occur in remote, sparsely populated regions where there is little or no damage.