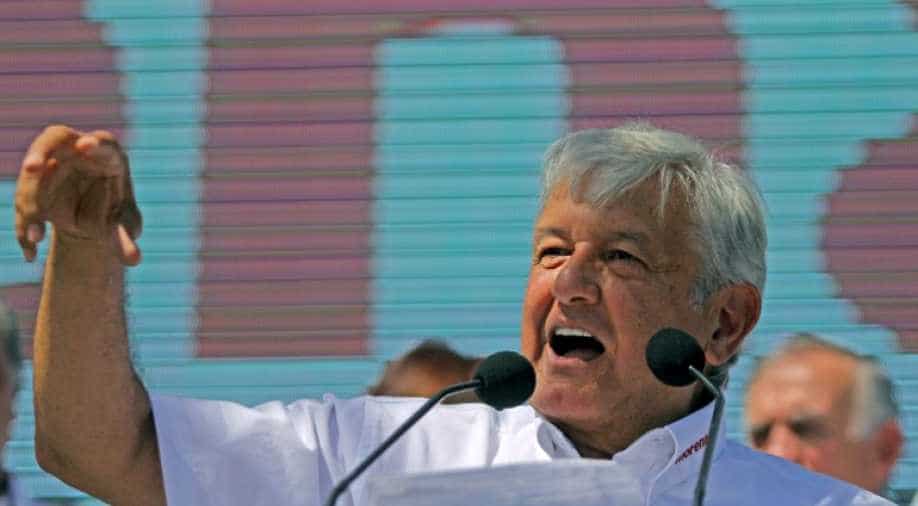 Lopez Obrador, who was first in line to cast his ballot at his polling station in Mexico City's Tlalpan district, called the elections "historic."

"We represent the possibility of real change, a transformation," he told hundreds of journalists crowded at the entrance.

"People are going to decide between more of the same or a genuine change.... We are going to achieve a peaceful transformation, without violence. There is going to be an orderly but also deep change, because we are going to banish corruption, the main problem facing Mexico."

Many voters are sick of the two parties that have governed Mexico for nearly a century: the ruling Institutional Revolutionary Party (PRI) and the conservative National Action Party (PAN).

Lopez Obrador, 64, calls them both part of the same "mafia of power," a message that has resonated with many people -- even if the former Mexico City mayor has been vague on what the change he promises will look like.

The poll aggregator Oraculus gave Lopez Obrador 48.1 percent of the vote heading into election day, to 26.1 percent for former speaker of Congress Ricardo Anaya of the PAN, 20.8 percent for ex-finance minister Jose Antonio Meade of the PRI and five percent for independent candidate Jaime Rodriguez.

Lopez Obrador's coalition -- led by his party, Morena -- is within striking distance of a congressional majority and six of the nine governorships up for grabs.

That would be a major realignment in Mexican politics and a coup for a party launched only six years ago, originally as a grassroots movement to support the three-time presidential candidate's 2012 campaign.

Duncan Wood, director of the Mexico Institute at the Woodrow Wilson International Center for Scholars in Washington, said the country is on the verge of a major political realignment.

"You've got an openly left-wing economic nationalist who is from a new party, a party that didn't even exist at the last (national) election, who is managing to sweep into power, not just in the presidency, but in the Congress as well," he said.

"We're looking at a shift in Mexican politics."

Lopez Obrador has clashed with Mexico's business community, with some critics warning he would pursue Venezuela-style socialist policies that could wreck Latin America's second-largest economy.

Seeking to soothe, he has recruited a team of market-friendly advisers and backpedaled on his most controversial proposals, including reversing outgoing President Enrique Pena Nieto's landmark energy reform, which privatized the oil sector.

Mexico's next president faces a laundry list of challenges, including a lackluster economy and a thorny relationship with the United States under President Donald Trump, whose anti-trade, anti-immigration policies have turned diplomacy with Mexico's key trading partner into a minefield.

Besides electing their president for the next six years, Mexico's 88 million voters are choosing their 500 lower-house deputies and 128 senators, as well as a host of state and local officials.

In all, more than 18,000 posts are at stake -- the largest elections in Mexican history.

They have also been the most violent, with 145 politicians murdered since candidate registration began in September, according to the consulting firm Etellekt.