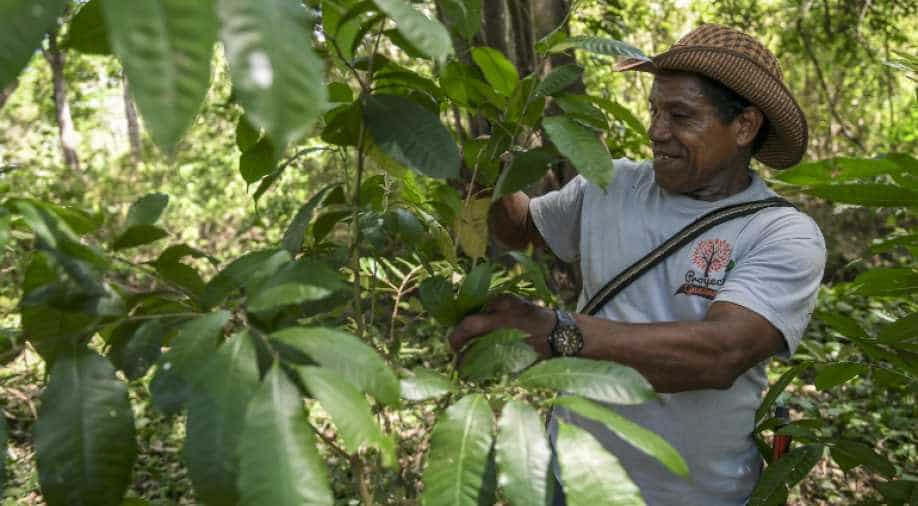 The guaimaro, a highly prized tree bearing nutritious fruit, once abundant throughout South America, is slowly being coaxed back from near extinction in Colombia.

Widely adaptable, the tree is resistant to drought -- though not, sadly, to man. Deforestation has decimated the bountiful tree, whose leaves and fruit have for centuries sustained animals and humans alike.

"Without trees, there is no water, and without water, there are no trees. People cut it, burn it for cultivation, for their livestock. Wood is scarce and the rivers are drying up," lamented Manuel Duran.

With a weary hand, the 61-year-old farmer raised his straw hat and wiped the sweat from his brow.

A searing sun beat down on the dry forest near Duran's home outside Dibulla, in the foothills of the majestic Sierra Nevada de Santa Marta mountains. Here, in Colombia's northeastern Guajira region, new life is being breathed back into stocks of the beloved tree.

More than 900 kilometers (560 miles) away, in Medellin, hundreds of global experts are gathered around the planet's sickbed this week. The Intergovernmental Platform on Biodiversity and Ecosystem Services (IPBES) will make its diagnosis later this month on the health of the world's fauna, flora and soil.

Conscious of the damage caused by rapacious agricultural practices, Duran has joined in a reforestation program run by a French-Colombian NGO.

"The guaimaro is a magic tree," said Daisy Tarrier, the 39-year-old director of the NGO Envol Vert. She enthusiastically lists the qualities of its fruit, a sort of orange nut-rich in nutrients.

Brosimum alicastrum, to give the tree its scientific name, grows from Mexico to Brazil. Depending on the country, it is known variously as ramon, campeche, ojoche, mewu or, in English, as maya nut.

It was as essential to pre-Colombian civilization as corn, and still is for a number of indigenous communities. But its qualities have been forgotten by many farmers.

In order to revive valuable knowledge in the fight against malnutrition with local food sources, Envol Vert organizes cooking workshops using the fruit.

Biologists have discovered the evergreen tree balances acidic soils, and even secretes the greenhouse gas carbon monoxide into the soil. Unlike most trees when they die, it never releases it into the atmosphere.

It can grow to a height of 50 meters (165 feet), and its taproot sinks just as deep into the earth. That makes it very resistant to both drought and hurricanes. It even has phoenix-like qualities, scientists say, as it readily regrows after a fire.

"This tree has a great ability to adapt to different climates and can withstand various types of soils, humidity, altitude, temperature -- and many animals feed on its fruit. It is an important species for conservation," said Colombian biologist Monica Florez.

A survivor of deforestation

But the lust for hardwoods for housebuilding and furniture-making, as well as deforestation to clear land for cattle breeding and for crops such as oil palms, has taken its toll -- not to mention the effect of Colombia's coca plantations to feed the demand for cocaine.

"We are still facing a huge challenge related to the control of deforestation," Colombia's minister for environment and sustainable development, Luis Gilberto Murillo, said last month. But he pointed out that the rate of deforestation was decreasing, from more than 282,000 hectares (700,000 acres) in 2010 to about 170,000 hectares in 2017.

Working with nearly 200 families, including 87 from Santa Rita de la Sierra, a village for displaced people near Dibulla, Envol Vert has contributed since 2011 to planting more than 30,000 trees across some 20 species, including 6,000 guaimaros.

Nurseries are entrusted to communities who raise trees there to be transplanted in their own plots.

"I've always loved guaimaro because it gives shade, and when the leaves fall, they are eaten by the goats and by the cattle. Its roots strengthen the soil, keep the moisture, and its fruits are good for animals and for us humans," said Maria Alarcon, 64, who lost two brothers and a son in the country's decades-long war.

A guaimaro will produce about 180 kilos (400 pounds) of fruit a year across a lifespan of some 100 years. The fruit is consumed raw and in juices, soups or mashed like potatoes. It can even be grilled and ground to powder to make infusions, with the look and flavor of chocolate coffee.

Indigenous communities use guaimaro sap for medicinal purposes: for asthma in Central America, anemia in Mexico, or rheumatism in Peru.

Maria Alarcon, her hands in the earth, is all too aware of the damage already done, and of the long road to recovery.

"We will have to plant a lot to replace all the trees that have been lost," she warned.