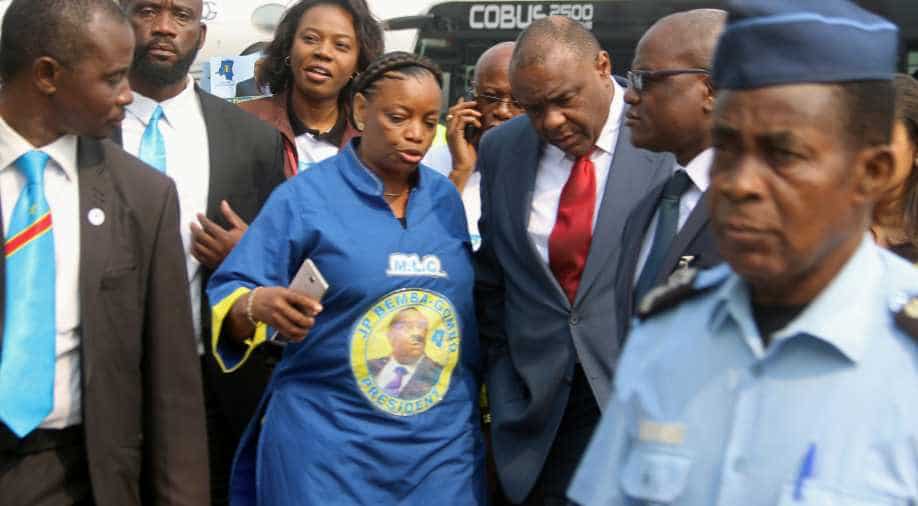 Tens of thousands of cheering supporters greeted opposition leader Jean-Pierre Bemba on Wednesday as he returned to Democratic Republic of Congo after a decade in prison to submit his candidacy for December's presidential election.

Bemba, a former vice president and warlord whose war crimes convictions at the International Criminal Court (ICC) in The Hague were quashed on appeal in May, is expected to pose a stiff challenge to President Joseph Kabila or his preferred successor.

After touching down aboard a private jet at Kinshasa's N'Djili airport, Bemba, 55, dressed in a dark suit and a red tie, shook hands with family members and officials from his MLC party before getting into a white SUV to drive toward the city centre.

Throngs of people -- many in T-shirts, hats and scarves bearing his likeness -- lined streets and peered down from pedestrian overpasses to catch a glimpse of Bemba, who waved and thrust his fist into the air from the open top of his car.

Police fired teargas near the airport and in the neighbourhood of Limite as they tried to clear the road, witnesses said.

Bemba was due to attend mass later on Wednesday and file his candidacy with the electoral commission on Thursday, MLC official Jean-Jacques Mbungani told reporters. He will then fly to his family's hometown of Gemena in northwestern Congo to pay his respects to his late father.

"The Congolese people have waited for this moment for a long time," said Toussaint Bodongo, an MLC member. "Bemba will maybe bring the solution that we need to Congo."

His return is expected to energise opposition to Kabila, who has been in power since his father's assassination in 2001 and is barred by constitutional term limits from standing for a new term.

Kabila has refused to commit publicly to not contesting the election. That has kept the country in suspense over whether he will choose someone else to represent his ruling coalition, paving the way for Congo's first democratic transition, or try to run again and risk a violent backlash.

Security forces have killed dozens of protesters since late 2016 when Kabila refused to step aside at the end of his mandate, saying elections needed more time to be organised. Militia violence in the eastern borderlands has surged since then.

The deadline to file candidacies is Aug. 8. Bemba said last week that he believes he is the strongest candidate to represent the opposition but would be willing to cede his place in favour of another candidate.

He could also see his eligibility to run challenged in the courts. The ruling coalition said last week he is disqualified from running by a witness tampering conviction at the ICC even though convictions for murder, rape and pillage committed by his militia in neighbouring Central African Republic in 2002 were thrown out.

The invalidation of Bemba's candidacy would infuriate his supporters, especially in western Congo. His loss to Kabila in the 2006 election saw gunbattles in the streets of Kinshasa between his militiamen and government troops.

"If they try to exclude him, we know that's political," said Denise Vila, the provincial coordinator of the MLC's women's league. "We are going to fight so that Jean-Pierre Bemba stays in the race."

Another opposition hopeful, the millionaire businessman and former provincial governor Moise Katumbi, plans to return to Congo on Friday after two years in exile but risks arrest due to a conviction for real estate fraud in 2016.

According to a poll released on Tuesday, Katumbi and fellow opposition leader Felix Tshisekedi lead the presidential race with 19 percent of the vote each. Bemba would receive 17 percent and Kabila nine percent.