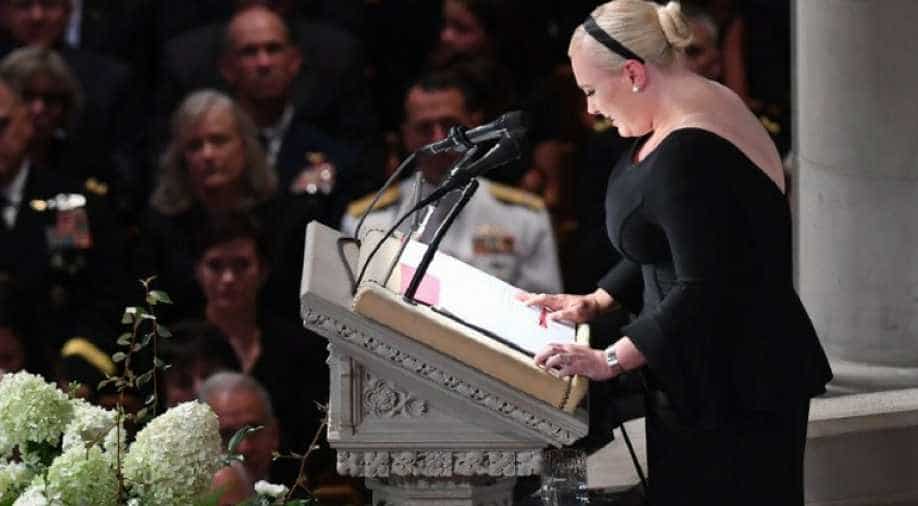 Meghan McCain, daughter of US Senator John McCain, speaks during a memorial service for her father at the Washington National Cathedral in Washington, DC. Photograph:( AFP )

Senator John McCain's daughter paid tribute to her father on Saturday (September 1) with a broadside at President Donald Trump, lambasting the US leader without naming him for using "cheap rhetoric" against a man celebrated as a war hero and statesman.

Meghan McCain, who has made no secret of her unhappiness with Trump's criticism of her father, kicked off a memorial service that was attended by a who's who crowd of Democratic and Republican leaders who gathered to celebrate the former war prisoner's life.

"He was a great man," Meghan McCain said at the Washington National Cathedral. "We gather here to mourn the passing of American greatness, the real thing, not cheap rhetoric from men who will never come near the sacrifice."

Trump, who has feuded publicly with McCain and mocked his military service, received five deferments that got him out of serving in the military. The president did not attend Saturday's service and spent the morning sending tweets on other subjects.

McCain's daughter delivered a tearful but forceful tribute to her father, who she said told her to "show them how tough you are" with her eulogy. Taking aim at Trump's campaign slogan, "Make America Great Again," she said McCain's America was always great.

Trump's absence was notable. Former US presidents Barack Obama and George W. Bush attended and also were scheduled to deliver eulogies to the longtime senator from Arizona. Both men bested McCain in separate presidential bids.

McCain's body, which had lain in state at the US Capitol, arrived at the Washington National Cathedral after his motorcade first stopped at the Vietnam Veterans Memorial, where his wife, Cindy McCain, laid a wreath to honour those who died in the war.

Members of the military slowly carried the coffin into the cathedral, past friends and loved ones who have counted among the top power players in US politics for decades.

McCain's design of his service was seen as a final message to the country about his wish for bipartisanship.

The statesman and former prisoner of war died August 25 of brain cancer, days shy of his 82nd birthday.

McCain's family had made clear that Trump was not welcome at memorial services in Arizona and Washington or at Sunday's private burial service in Annapolis, Maryland, at the US Naval Academy. McCain was a member of the Academy's Class of 1958.

McCain was a leading voice for revamping the country's immigration, campaign finance and environmental laws. But it was his military service, punctuated by years as a prisoner of war in North Vietnam, that molded McCain's political life.

McCain, who rose to the rank of captain in the US Navy, was shot down over Hanoi while on a bombing mission in 1967.

Held as a prisoner until 1973, McCain was tortured by his North Vietnamese captors in a jail that Americans dubbed the "Hanoi Hilton."

Japan to extend virus state of emergency in Tokyo area