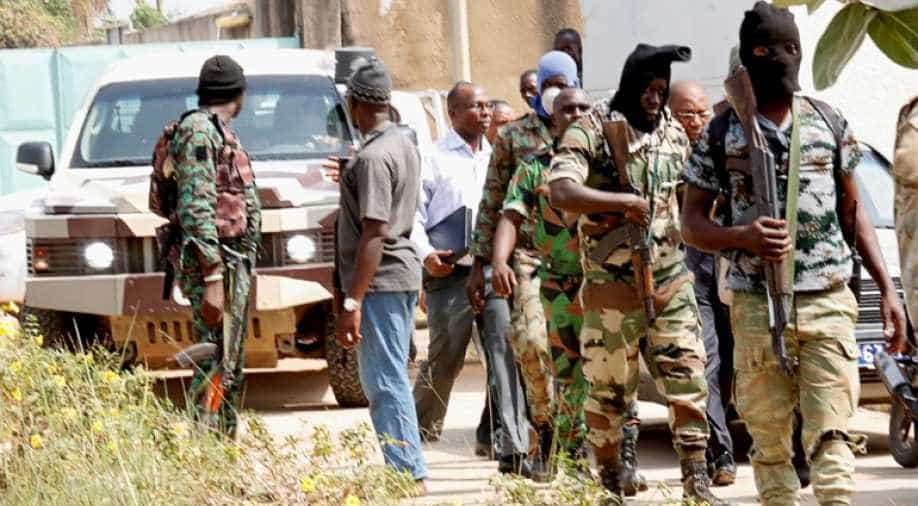 The mutiny began early Friday when the soldiers seized Bouake, Ivory Coast's second-largest city. Over the next two days, soldiers at military camps in cities and towns across the country joined the revolt. Photograph:( Reuters )

Rogue soldiers allowed Ivory Coast's defence minister and dozens of others to leave a house where they had been trapped on Saturday when some mutineers appeared to reject aspects of a deal intended to end a two-day revolt, a Reuters witness said.

It remained unclear, however, whether the disgruntled soldiers - most of them former rebel fighters now integrated into the army - would honour the agreement announced by President Alassane Ouattara just hours earlier.

The mutiny began early on Friday when the soldiers seized Bouake, Ivory Coast's second-largest city. Over the next two days, soldiers at military camps in cities and towns across the country, including the commercial capital Abidjan, joined the mutiny.

Following talks between a government delegation headed by defence minister Alain-Richard Donwahi and representatives of the mutineers, Ouattara announced he had agreed to some of the soldiers' grievances but chastised them for sparking the unrest.

"I would like to say that this manner of making demands is not appropriate. It tarnishes the image of our country after all our efforts to revive the economy," he said in a declaration that was broadcast on state-owned television.

A mutineer close to the negotiations said the soldiers were satisfied with the deal, which would address demands for bonus payments and improve living conditions, and said they were preparing to return to barracks.

But some of the renegade troops later opened fire outside the house in Bouake where the talks had taken place, trapping Donwahi, local officials, journalists and the mutineers' own negotiators inside.

They were only allowed to leave several hours later.

"We are all out. The soldiers stepped aside and allowed us out. The minister took off from the airport," said a Reuters reporter who had also been trapped inside the house.

A defence ministry statement later denied Donwahi had been held by the soldiers.

"The minister was in no way threatened by his soldiers but rather continued to carry out the talks," the statement read.

Ivory Coast - French-speaking West Africa's largest economy and the world's leading cocoa producer - has emerged from a 2002-2011 political crisis as one of the continent's rising economic stars.

But years of conflict and a failure to reform its army, thrown together from a patchwork of former rebel fighters and government soldiers, have left it with an unruly force hobbled by internal divisions.

The revolt comes two years after hundreds of soldiers barricaded roads in cities across Ivory Coast demanding back pay in a near identical uprising.

The government then also had struck a deal that included amnesty from punishment and a financial settlement for the mutineers. The repeat of such a solution raises the risk they could be encouraged to do it again.