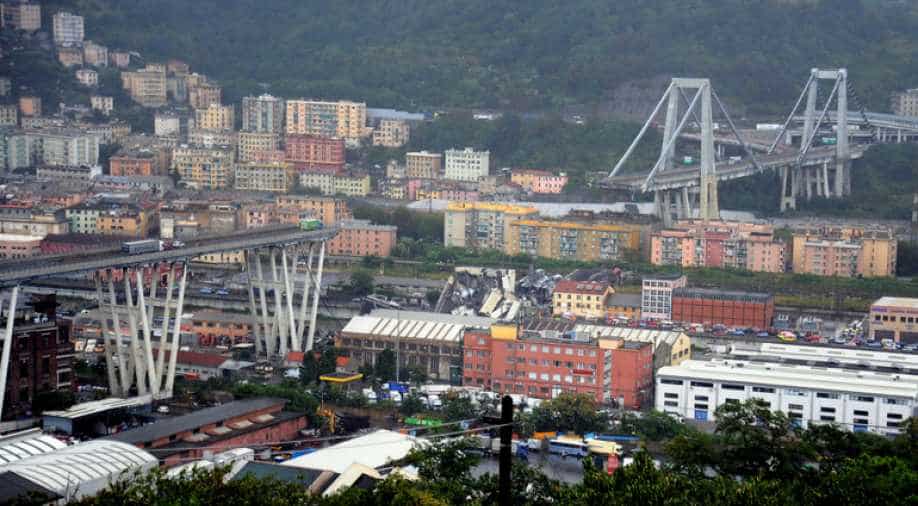 The collapsed Morandi Bridge is seen in the Italian port city of Genoa August 14, 2018. Photograph:( Reuters )

Genoa's Morandi motorway bridge, a 200-metre (650-foot) portion of which collapsed on Tuesday killing dozens of people, has been riddled with structural problems since its construction in the 1960s, which has led to expensive maintenance and severe criticism from engineering experts.

Celebrated designer
The Morandi bridge was built between 1963 and 1967. It has a maximum span of 219 metres, a total length of 1.18 kilometres, concrete piers (vertical structures that support the arches of a bridge) that reach 90 metres in height.

The technology of pre-stressed reinforced concrete used in the construction was the hallmark of its designer, the celebrated Italian engineer Riccardo Morandi, who died in 1989.

Dubbed patent "Morandi M5", he had used the technology for other works, including a wing of the Verona Arena in 1953.

This technique also characterises another, even longer and just as problematic Morandi bridge: the 8.7-kilometre long General Rafael Urdaneta Bridge that spans the bay of Maracaibo, Venezuela, and was completed in 1962.

'Waiting to happen'
On Tuesday specialist engineering website "Ingegneri.info" published a piece that highlighted how the bridge had always presented "structural doubts", calling it "a tragedy waiting to happen".

Lending support to the website was Antonio Brencich, a professor of reinforced concrete construction at the University of Genoa, highlighting the constant maintenance the bridge needed.

"It was affected by extremely serious corrosion problems linked to the technology that was used (in construction). Morandi wanted to use a technology that he had patented that was no longer used afterwards and that showed itself to be a failure," said Brencich to Radio Capitale,

Brencich has long been a critic of the bridge. In 2016 he spoke with "Ingegneri.info" about construction going over budget and poor calculations over concrete viscosity that led to an uneven road surface which wasn't fully corrected until the 1980s.

At the time of the accident, maintenance work was in progress.

- Tender for work -
Economic news agency Radiocor reports that Italy's motorway agency had recently launched a 20-million-euro tender for work on the viaduct.

The tender provided for a strengthening of the bridge's pier cables, including those of pier nine, the one that collapsed on Tuesday.

Notwithstanding the importance of a road that sees 25 million vehicles pass along it every year, the demolition of the bridge was being studied as far back as 2009.

At risk
"Ingegneri.info" says that bridges like the Morandi viaduct should have a lifespan of at least a century, but the structure has been the subject of major maintenance work in the years after its completion, in particular to repair cracks and combat degradation of the concrete.

"Fifty years ago, we had unlimited confidence in reinforced concrete, we thought it was eternal, but now we know that it only lasted a few decades," Diego Zoppi, former president of the Genoa branch of the order of architects, told reporters on Tuesday.

"The Italy built in the 1950s and 1960s is in urgent need of renovation. The risk of collapses is underestimated, the works built at that time are coming to an age when they are at risk."