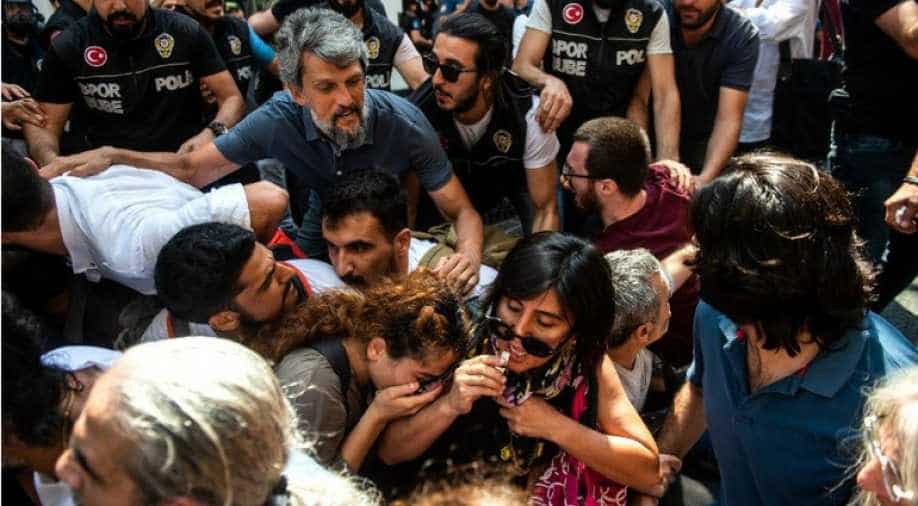 Istanbul police on Saturday broke up a regular demonstration by Turkish mothers remembering the disappearance of relatives in the 1980s and 1990s, detaining almost 50 people as participants marked the 700th such weekly protest.

The mothers, known as the Saturday Mothers (Cumatesi Anneleri in Turkish), have met on Saturdays since May 27, 1995 in the heart of Istanbul, to remember relatives who disappeared allegedly at the hands of the state in one of modern Turkey's most turbulent periods.

Turkish media reports said that 47 people were detained, with protesters seen being grabbed by the police and roughly taken away into waiting vans.

Among those detained was veteran Saturday Mothers protest leader Emine Ocak, who reports said is aged 82, and photographs showed being led away by two female officers.

Social media users noted that pictures had been taken in 1997 of Ocak -- whose son Hasan disappeared after being taken into custody in 1995 -- when she was roughly detained in similar circumstances.

Turkish lawyer Efkan Bolac wrote on Twitter that all 47 people detained were being released after giving statements to the police.

The crackdown by the police followed an announcement by the authorities of the central Beyoglu district where the rally is held that Saturday's demonstration would be banned.

It said that calls for the rally to take place had been made on social media accounts linked to the outlawed Kurdistan Workers Party (PKK) and no application for permission to hold it had been made.

The disappearances happened at the peak of the PKK insurgency demanding self-rule in the Kurdish-dominated southeast. Tens of thousands have lost their lives in the conflict that began in 1984 and continues to this day.

The country was also wracked by political instability and violence following the 1980 military coup, with many detained for political activism.

Activists say the state has never properly investigated the fate of those who disappeared after being detained by the authorities.

The Saturday Mothers group were unable to hold their protests for a decade from 1999 to 2009 due to repeated police interventions but they then resumed. Police have since maintained a watchful presence at the protests but this was the first time in recent years the protest has been broken up.

The forceful dispersion of the rally comes two months after President Recep Tayyip Erdogan won a new mandate with enhanced powers which activists fear will be used to squeeze freedom of expression in Turkey.

The Saturday Mothers group is said to have been inspired by the Mothers of the Plaza de Mayo, a group of Argentinian mothers who hold rallies after their children disappeared during Argentina's military dictatorship.

The Saturday Mothers demand a full opening of the state archives to uncover what happened to their loved ones, prosecution of the perpetrators and the abolition of the statute of limitations for abuses committed by the security forces.