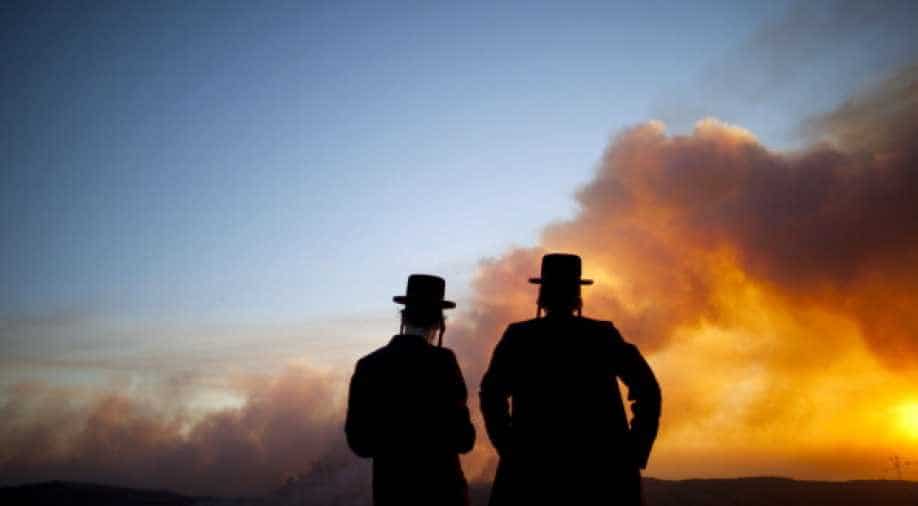 Some residents remain trapped in their homes. In photo: Jewish men watch as smoke from a wildfire rises into the sky on December 2, 2010. Photograph:( Getty )

Tens of thousands of Israelis fled raging bushfires in the northern city of Haifa Thursday, as Prime Minister Benjamin Netanyahu said any proof of arson would be treated as "terror".

Internal Security Minister Gilad Erdan said up to half of a spate of fires had been "arson terror", while another minister appeared to point a finger at the country's Arab minority -- drawing fierce rebukes from Arab Israeli leaders.

Some residents were trapped in their homes as the army called up reservists to support firefighters struggling to cope with a third day of blazes.

Police spokesman Micky Rosenfeld said residents in eight Haifa neighbourhoods had been told to leave due to six separate fires.

Residents spoke of a desperate rush to evacuate the elderly.

"The fire is out of control and is spreading from one house to the other," the rescue services chief in the Carmel neighbourhood, Naftali Rottenberg, told public radio.

"Sometimes we are taking residents out against their will."

Yael Hame, a Haifa resident who fled her house, said it was "very frightening".

"The fire was up over the skyscrapers. It came up to 20 stories high."

Hame said she thought the fires were "much more dangerous" than a blaze in 2010 in Haifa that killed 44 people -- the deadliest in Israeli history.

Around 65 people have been hospitalised with mild injuries, according to the Magen David Adom medical service.

A number of residents remained stuck in their homes, a fire service spokesman said.

Fires also raged in two areas on the outskirts of Jerusalem as well as near the Jewish settlement of Talmon in the occupied West Bank, police said, with Netanyahu saying there were 15 fire sites in total.

A number of countries made immediate pledges of support, including planes.

Speculation in Israel quickly turned to the source of the fires.

Noah Wolfson, head of the Meteo-Tech meteorology website, said the dry autumn and strong winds meant conditions were perfect for fires to spread -- whether sparked by accident or on purpose.

"The extreme dryness -- relative humidity below 10 percent -- coupled with very strong winds, enhance and encourage any small fire to expand and be horrendous," he said.

The forecast for coming days was not optimistic, he added, with winds due to slow somewhat but no rain expected until early next week.

Erdan told a press conference up to half of the recent fires had been started deliberately, labelling it "arson terror".

"It is clear that many fires started as deliberate arson," he said.

Education Minister Naftali Bennett of the far-right Jewish Home party appeared to blame the alleged arson on members of the Arab minority.

Netanyahu, speaking near the scene of the fires, said authorities had noticed "encouragement to arson" on social media.

"Every fire caused by arson or incitement to arson is terror and will be treated as such," he told reporters.

Ayman Odeh, the head of the Arab block in the Israeli parliament, said in a statement the immediate accusations amounted to "incitement" against Arabs.

He pointed out that many of the fires had disproportionately affected Arab areas, including in Haifa where he is from.

"We have lived in this country for hundreds and thousands of years and not burned it."

Odeh's party said in a separate statement that thousands of Arab families were ready to accept those who fled the fires, regardless of their religion.