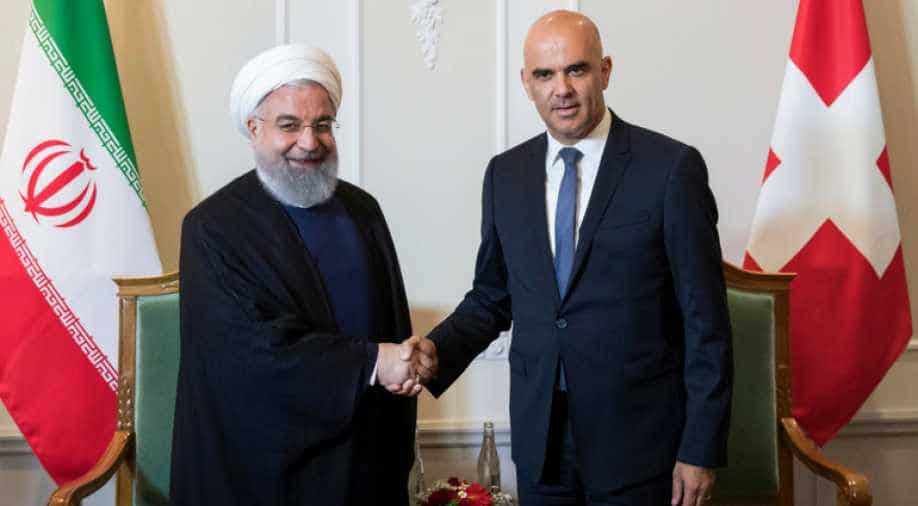 Swiss Federal President Alain Berset and Iranian President Hassan Rouhani shake hands as they pose for a picture at the beginning of a meeting during Rouhani's official visit in Bern, Photograph:( AFP )

Iran's President Hassan Rouhani held a bilateral meeting in Bern on Monday evening (July 2) with his Swiss counterpart Alain Berset, on the first day of the Iranian leader's visit to Switzerland.

The leaders met on the day Belgian authorities said an Iranian diplomat was arrested along with two people suspected of plotting a bomb attack on a meeting of an exiled Iranian opposition group in France attended by Donald Trump's lawyer Rudy Giuliani.

Iran said it was ready to work with all concerned parties to uncover what was a sinister "false-flag" ploy.

Rouhani and Berset were then joined by Iranian Foreign Minister Mohammad Javad Zarif and his Swiss counterpart Ignazio Cassis, who also held a separate bilateral meeting.

Rouhani's two-day visit to Switzerland is aimed at strengthening bilateral ties, amidst fears that the US may impose new sanctions on the country after its withdrawal from a deal with Iran on its nuclear programme.

A thematic forum on innovation and industry between the Iranian and the Swiss delegations is scheduled on Tuesday (July 3) morning before a news briefing with the two presidents.