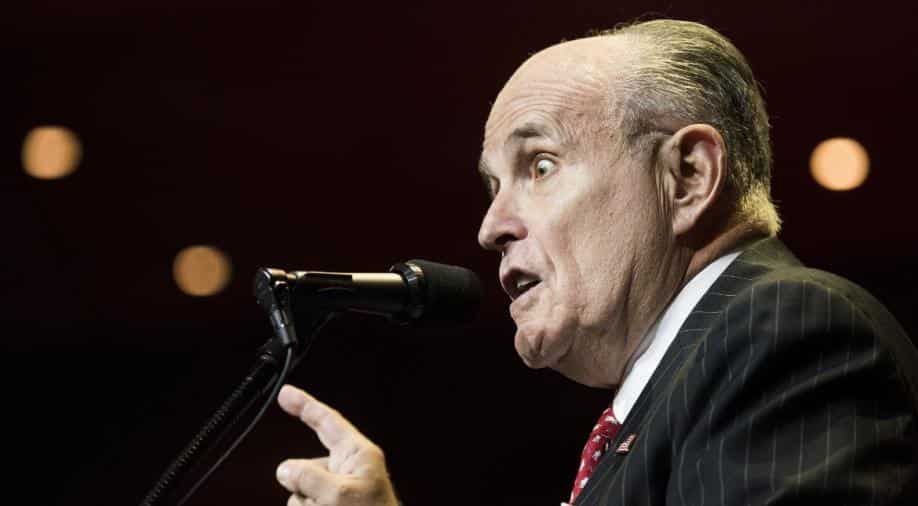 An Iranian diplomat has been arrested along with two people suspected of plotting a bomb attack on a meeting of an exiled Iranian opposition group in France attended by Donald Trump's lawyer Rudy Giuliani, Belgian authorities said on Monday.

Three other arrests were made in France.

Several former European and Arab ministers also attended the meeting of the Paris-based National Council of Resistance of Iran (NCRI) - an umbrella bloc of opposition groups in exile that seek an end to Shi'ite Muslim clerical rule in Iran.

Iran's foreign minister called the news a sinister "false-flag ploy" and said Tehran was ready to work with all concerned parties to get to the bottom of it.

Two suspects in Belgium were intercepted by Belgian police on Saturday, with 500 grams of TATP, a home-made explosive produced from easily available chemicals, as well as a detonation device found in their car, a joint statement by the Belgian prosecutor and the intelligence services said.

The 38-year-old man and a 33-year-old woman, identified only as Amir S. and Nasimeh N., were charged with attempted terrorist murder and preparation of a terrorist act, it said.

The diplomat at the Iranian embassy in the Austrian capital Vienna was arrested in Germany, the Belgian statement said.

Three people of Iranian origin were arrested in France to assess their link to the Brussels' suspects, a French judicial source said.

"How convenient: Just as we embark on a presidential visit to Europe, an alleged Iranian operation and its 'plotters' arrested," Foreign Minister Mohammad Javad Zarif tweeted.

"Iran unequivocally condemns all violence & terror anywhere, and is ready to work with all concerned to uncover what is a sinister false flag ploy."

Iranian President Hassan Rouhani is due to visit Austria on Wednesday.

The Belgian statement gave no further details about diplomat, other than saying they were suspected of having been in contact with the Belgian pair arrested.

It said one of those arrested in France, Merhad. A, was a suspected accomplice of the pair in Brussels.

The NCRI meeting, which attracted a crowd of thousands, took place on Saturday in Villepinte, just outside Paris, a three-hour drive from Brussels.

"A plot by the religious dictatorship ruling Iran to carry out a terrorist attack against the grand gathering of the Iranian Resistance in Villepinte was foiled," Shahin Gobadi spokesman for NCRI said in a statement.

The People's Mujahideen Organization of Iran, is the main component of NCRI. The group, also known by its Persian name Mujahideen-e-Khalq, was once listed as a terrorist organisation by the United States and the European Union but is no longer.

Tehran has long called for a crackdown on the NCRI in Paris, Riyadh, and Washington. The group is regularly criticised in state media.

Following the arrests, Belgian authorities also conducted five raids in different parts of the country but did not elaborate on whether anything was found.

"Once more the good cooperation between countries has borne fruit," Michel wrote.