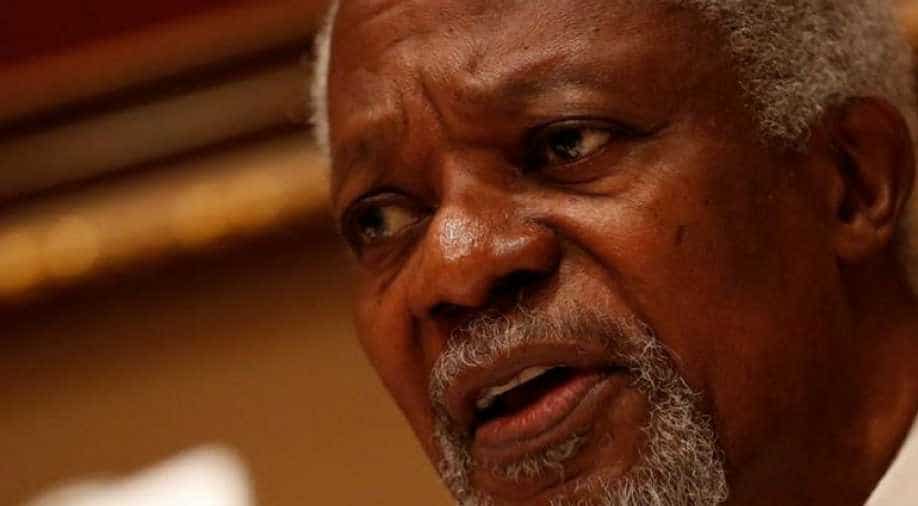 There was an outpouring of condolences from leaders around the world today after the death of former United Nations Secretary-General and Nobel Peace Prize laureate Kofi Annan.

Current UN chief Antonio Guterres voiced deep sadness at the news, describing his predecessor as "a guiding force for good".

"In many ways, Kofi Annan was the United Nations," he added.

"He rose through the ranks to lead the organisation into the new millennium with matchless dignity and determination."

"Like so many, I was proud to call Kofi Annan a good friend and mentor."

"Kofi was humanity's best example, the epitome, of human decency and grace. In a world now filled with leaders who are anything but that, our loss, the world's loss becomes even more painful," he said.

"He was a friend to thousands and a leader of millions." "There are some human beings who will seem irreplaceable to us, rare human beings. Kofi Annan is high among them. Goodbye my dear friend... Goodbye Kofi."

Ghanaian President Nana Akufo-Addo declared a week of mourning, saying the national flag will fly at half-mast at home and in the country's diplomatic missions around the world in honour of "one of our greatest compatriots".

"He brought considerable renown to our country by this position and through his conduct and comportment in the global arena," the president said in a statement.

"He was an ardent believer in the capacity of the Ghanaian to chart his or her own course onto the path of progress and prosperity."

"Annan was a great friend of the people of South Africa who played an immeasurable role in shaping the global agenda in favour of the people of the developing south," the ANC said in a statement.

"Amongst his many passions was silencing the guns on the African continent."

British Prime Minister Theresa May said her "thoughts and condolences are with his family".

"A great leader and reformer of the UN, he made a huge contribution to making the world he has left a better place than the one he was born into," she said on Twitter.

"Annan... Has left us but his legacy remains to keep working for peace, security and to strengthen the defence of human rights," Sanchez tweeted.

NATO chief Jens Stoltenberg said he was saddened to hear the news.

"His warmth should never be mistaken for weakness. Annan showed that one can be a great humanitarian and a strong leader at the same time," Stoltenberg wrote on Twitter.

"The UN and the world have lost one of their giants."

"He was such a great source of inspiration for all of us and will be greatly missed!" he tweeted.

The Elders organisation -- a group of statesmen co-founded by Annan which speaks out on global issues -- hailed the former UN chief as "a voice of great authority and wisdom in public and private".

"The world has lost an inspiring figure -- but one whose achievements will never be forgotten, and whose commitment to peace and justice will endure to inspire future generations," deputy chair Gro Harlem Brundtland said in a statement.