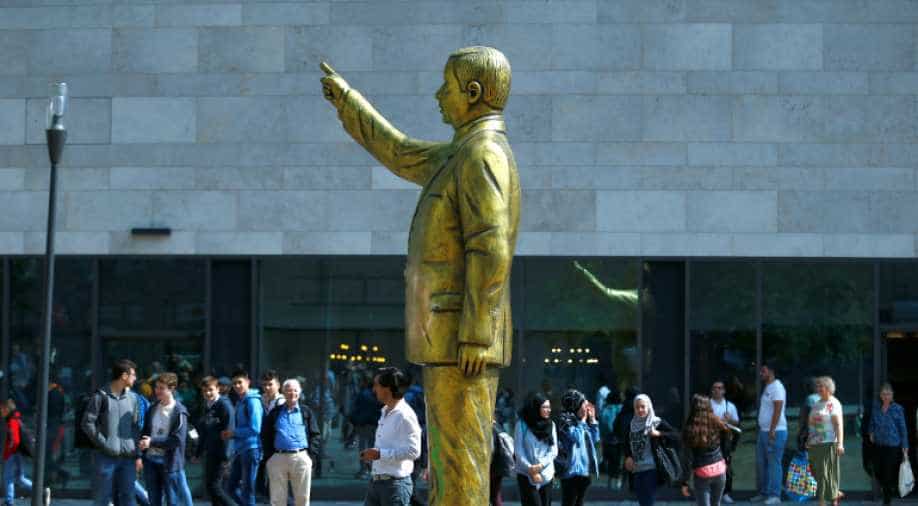 The German city of Wiesbaden removed Wednesday a temporary statue of Turkish President Recep Tayyip Erdogan set up in a town square by artists, after it sparked confrontations between his supporters and opponents.

"In agreement with state police, Mayor Sven Gerich decided to have the statue removed as security could no longer be guaranteed," the city's government said on Twitter.

Firefighters arrived shortly after midnight with a crane to lift the four-metre (13-feet) tall golden effigy of Erdogan from the central German Unity Square, where it had been placed on Monday as part of Wiesbaden's Biennale art festival.

Organisers had hoped the statue would provoke public debate relevant to this year's theme of "bad news".

Since a failed 2016 coup attempt in Ankara, Erdogan's crackdown on political opponents and journalists -- including some German nationals -- has been closely followed in Germany, home to a sizeable Turkish minority.

The statue, which had been posed to point boldly into the distance, was quickly defaced with insults like "Turkish Hitler".

"In a democracy, we have to put up with all kinds of opinions".

But Emil Saenze, a local representative of far-right, anti-immigrant party Alternative for Germany (AfD) blamed the outcry on "stupidity" by the organisers, who had "given a stage to a despot who spends his time humiliating Germans".