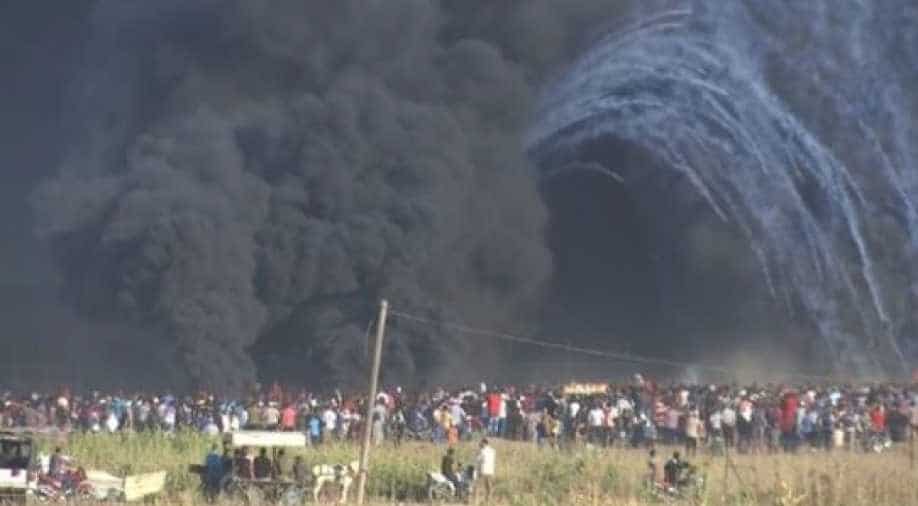 A 40-year-old Palestinian hit by Israeli fire on the Gaza border died of his wounds on Saturday, taking the death toll from protests the previous day to three, the territory's health ministry said.

He was among at least 131 Palestinians wounded by Israeli bullets during Friday's protests, even as an informal truce ending a deadly flare-up between Gaza's Islamist rulers Hamas and the Israeli army largely held.

In all 307 Palestinians were wounded on Friday, some by tear gas, including two journalists and five medics, the health ministry in the coastal enclave said.

It identified the man who died Saturday as Ahmed Abu Lulu, saying he was shot in a section of the border east of the southern city of Rafah, where the two other Palestinians were also killed.

The ministry had earlier identified the other two as Ali al-Alul, 55, and volunteer medic Abdullah al-Qatati, 21.

Funerals for all three Palestinians took place on Saturday and were attended by thousands of mourners.

Doctors and first responders were among the mourners, in a show of solidarity for Qatati.

On Friday, a few thousand protesters gathered at various locations along the border, setting tyres ablaze and throwing stones, but in smaller numbers than in previous weeks, AFP correspondents said.

The Israeli army said a grenade was thrown at troops without causing any casualties, and that soldiers responded with tank fire at two Hamas posts.

But the border was otherwise calm after a reported deal to end all rocket fire into Israel and air strikes on Gaza appeared to take effect around midnight (2100 GMT) on Thursday.

There was no official confirmation of the truce from Israel or Hamas, but there were no fresh air strikes on Friday.

Thursday had seen extensive Israeli raids in retaliation for the launching of more than 180 rockets and mortar rounds by Hamas and its allies on Wednesday night.

It was one of the most serious escalations since the 2014 Gaza war and followed months of rising tensions.

Three Palestinians were killed in the Israeli strikes, including a pregnant woman and her 18-month-old daughter. Seven Israelis were wounded by Palestinian rocket fire.

The European Union said Gaza and Israel were "dangerously close" to a new conflict and called for urgent efforts to protect civilians.

At least 168 Palestinians have been killed since the border protests began on March 30, with most succumbing to Israeli fire during demonstrations. Others have died in air strikes.

Over the same period, one Israeli soldier has been shot dead by a Palestinian sniper.

Separately on Saturday, the Israeli army carried out four drone attacks, targeting Palestinians who were flying balloons carrying incendiary devices across the border into Israel, the military said.

Two Palestinians were injured, one of them seriously, Gaza's health ministry said.

Israeli soldiers also opened fire at some 50 Palestinian fishing boats that sailed off Gaza's northern coast on Saturday to protest Israel's sea and land blockade of the enclave, the fishermen's union said.

It said 200 Palestinians were on the boats but that no one was hurt in the incident.

Israel, which has imposed a crippling blockade on Gaza for a decade, prevents boats from the enclave sailing further than six nautical miles offshore.

In July it further reduced that zone to three miles after scores of kites carried firebombs across the border to burn Israeli farmland.

The Israeli fire service says the devices have sparked hundreds of fires and burned some 3,000 hectares.

Israel says its 10-year blockade of the Mediterranean coastal enclave is necessary to stop the Islamist Hamas rulers of Gaza and other militant groups from obtaining weapons or material that could be used to make them.