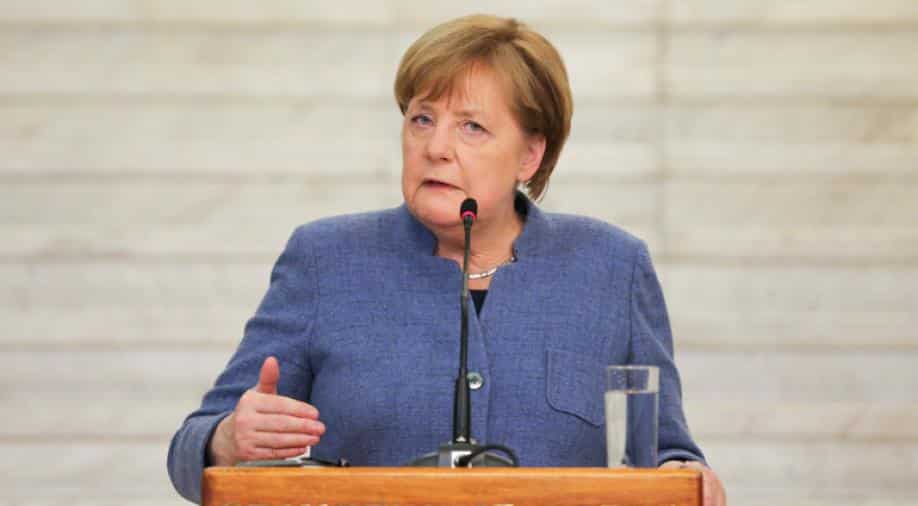 Alternatively, it could break up the two parties' decades-long partnership, depriving Merkel of her majority in parliament

German Chancellor Angela Merkel's ruling coalition was facing an uncertain future, as her hardline conservative interior minister, Sunday offered his resignation after weeks of battling to change her mind on migrant policy.

Horst Seehofer told fellow leaders of the conservative Bavarian CSU party he wants to resign as both party chief and interior minister, saying he had "no support", sources at their closed-door meeting in Munich told AFP.

But CSU parliamentary group chief Alexander Dobrindt "does not want to accept Seehofer's resignation," participants in the hours-long huddle said.

The lack of clarity from the Bavarian camp raises questions about the future of Merkel's governing coalition between the CDU-CSU alliance and the centre-left Social Democratic Party (SPD).

If Seehofer does quit, the CSU could offer a replacement interior minister if it aims to remain tied to Merkel's CDU party.

Alternatively, it could break up the two parties' decades-long partnership, depriving Merkel of her majority in parliament and pitching Germany into uncharted political waters.

To politically survive, Merkel could attempt a minority government, seek a new coalition partner in the ecologist Greens or pro-business Free Democrats, or orchestrate a no-confidence vote in parliament that could trigger new elections.

Meanwhile, the CDU on Sunday offered its sister party no conciliatory gesture in the tug-of-war over whether to seek European solutions to slash migrant numbers or take unilateral national measures.

After the Bavarians' relentless pressure on Merkel, European leaders on Friday agreed to new measures to reduce immigration to the bloc and so-called "secondary migration" of asylum-seekers between countries.

Merkel, who has been in office since 2005, warned last week the issue of migration could decide the very future of the EU itself.

Leaders said they would consider setting up "disembarkation platforms" outside the EU, most likely in North Africa, in a bid to discourage migrants and refugees boarding EU-bound smuggler boats.

At the national level, Merkel also proposed that migrants arriving in Germany who first registered in another EU country should be placed in special "admissions centres" under restrictive conditions, according to a document she sent to the CSU and the Socialists.

The document also outlined deals with 16 other countries to return already-registered migrants if they reached Germany.

Sources said Seehofer rejected Merkel's assessment that the EU-wide measures would "have the same effect" as his demand to turn away at the border asylum-seekers already registered in other EU nations.

That left him with only three options.

He could defy her orders by ordering border police to carry out his plan, which would force her to fire him and almost certainly break up the CDU-CSU alliance, or he could accept a humiliating climbdown or resign.

As the CDU and CSU parties hunkered down in Berlin and Munich, leaders on both sides sought to clarify what was a stake.

"It's not about who comes out on top, but about what's right," Bavarian state premier Markus Soeder told the CSU gathering, according to news agency DPA.

Meanwhile for Merkel's troops, "the image of the country, our ability to act and our ability to govern" were at stake, said economy minister and close Merkel ally Peter Altmaier.

The chancellor's frantic last-minute diplomacy was ultimately prompted by the CSU's fear of losing its cherished absolute majority in Bavaria's state parliament.

The "Free State" with its beer-and-lederhosen Alpine traditions, powerful industries and impenetrable dialect has a more conservative bent than other German regions.

But the CSU and CDU together form a centre-right force that has dominated national politics for decades.

Political stability was upset by Merkel's 2015 decision to keep borders open to migrants and refugees arriving from the Middle East via the Balkans, Hungary and Austria.

Since then, more than one million people have arrived in Germany, while Merkel's governments have repeatedly tightened immigration and asylum laws.

Nevertheless, the anti-refugee, anti-Islam Alternative for Germany (AfD) was propelled into federal parliament for the first time last year by outrage over immigration, leading to months of paralysis while Merkel struggled to put together a workable coalition.

Weeks of "Merkel-bashing", however, have failed to help the CSU, as a Forsa poll, last week showed around 68 per cent of Bavarians backed Merkel's quest for a Europe-wide answer to migration rather than Germany going it alone.