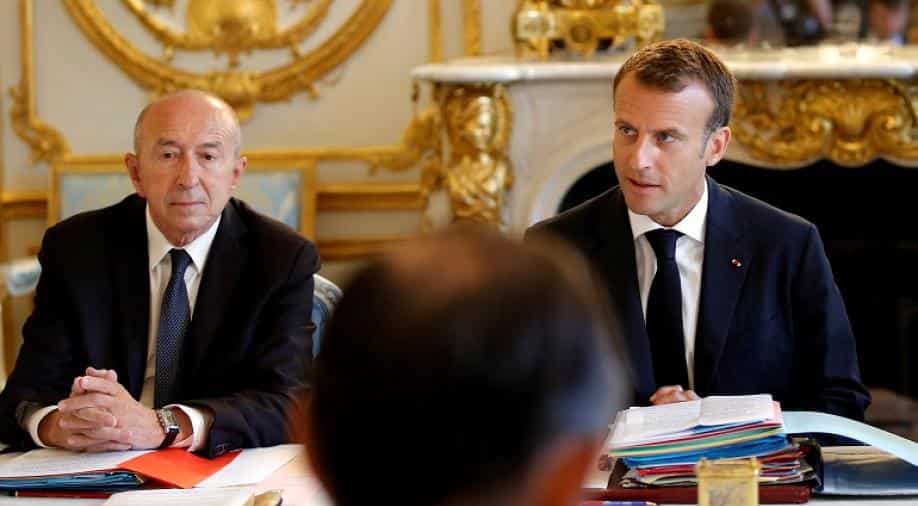 French President Emmanuel Macron sits next to Interior Minister Gerard Collomb as he leads the last cabinet meeting before the government goes on holidays at the Elysee Palace in Paris, France August 3, 2018. Photograph:( Reuters )

French President Emmanuel Macron was on Tuesday forced to accept the resignation of his interior minister's resignation after early ally Gerard Collomb insisted he wanted to step down to run for election as mayor of his hometown Lyon.

Morcon accepted the resignation after rejecting it 24 hours earlier.

Collomb, 71, a former Socialist party stalwart who became one of Macron's earliest and most eager backers.

"The French people and the people of Lyon need clarity, so I maintain my offer to resign," Collomb responded when asked whether he would stay on as interior minister after Macron initially turned down his resignation on Monday.

"Considering the rumours and the pressure, I don't want the fact I will be a candidate somewhere tomorrow to affect the way forward for the interior ministry," he said.

Late on Tuesday, Macron's office said the president had accepted Collomb's resignation and that Prime Minister Edouard Philippe, who reportedly cancelled a trip to South Africa, would assume his responsibilities until a replacement was found.