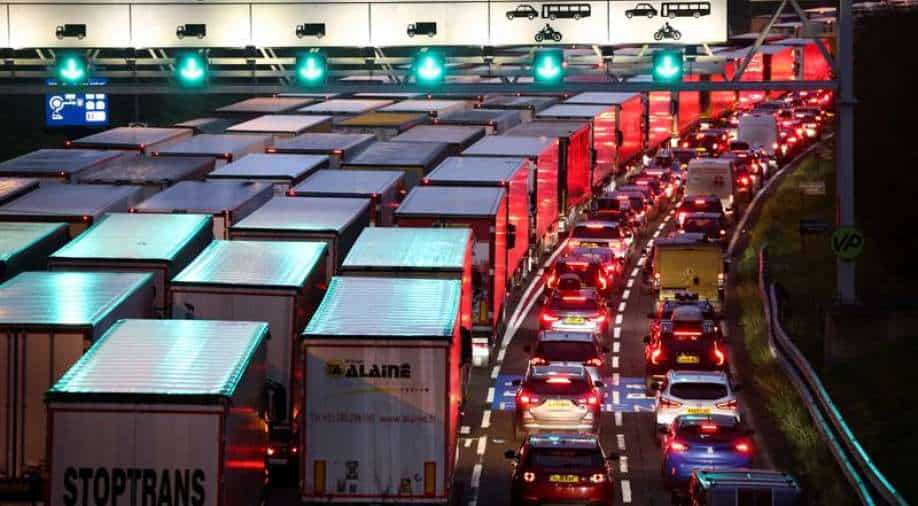 Cars and trucks queue at the UK entrance of the Eurotunnel on December 17 before increased restrictions for travel to France from Britain. Photograph:( Reuters )

Many Britons take the Channel Tunnel from England to France, using Eurotunnel’s Shuttle service, to take cars from the UK to their homes in other EU countries.

Following an unexpected crackdown, France declared on Thursday that it would show "tolerance" to British travellers wishing to transit the nation on their way to residences elsewhere in the European Union.

Non-resident Britons were no longer allowed to drive across France under harsher Covid rules that went into effect this week; only those who have a primary French home would be allowed in.

Many Britons drive from the UK to their residences in other EU countries via the Channel Tunnel to France, using Eurotunnel's Shuttle service.

According to new travel guidelines issued by French officials on December 28, only Britons whose official primary residence is in France are allowed to enter.

Eurotunnel is a bridge between the United Kingdom and France that connects Folkestone in England with Coquelles near Calais.

Eurotunnel announced on Wednesday that the French government has strengthened its rules in a "urgent" update.

"Unless they have French residency, British people are now deemed third-country citizens and cannot travel through France by car to reach their EU country of residence," Eurotunnel warned.

"Nationals of the European Union or equivalent," as well as their partners and children, "who have their main residence in France or who join, in transit through France, their main residence in a country of the European Union" are considered to have a compelling reason for travelling from the UK through France, according to French travel guidance.