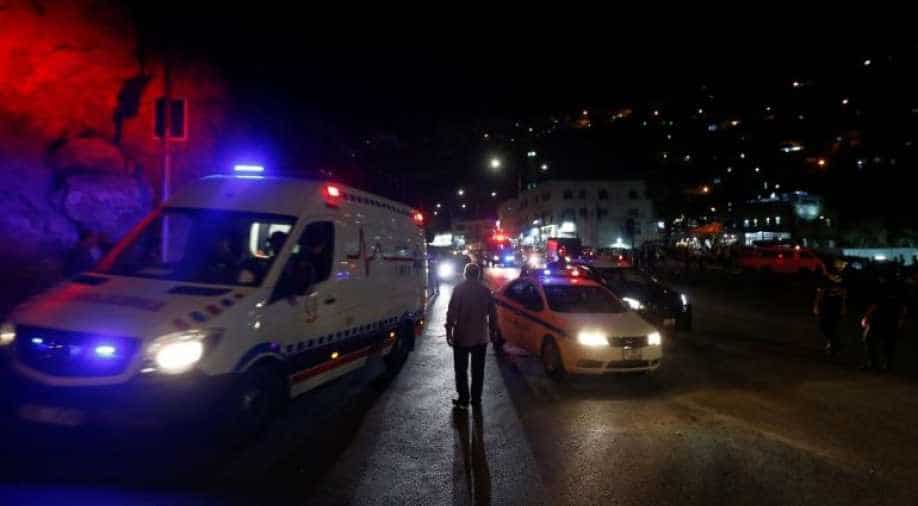 Prime Minister Omar al-Razzaz, who chaired the meeting, vowed Saturday that Jordan would 'not be complacent in the hunt for terrorists'.

Security forces pulled the bodies of three suspected militants from the wreckage of a building in a central Jordanian city on Sunday following a shoot-out in which at least four security personnel were also killed, the government said.

In a huge security operation, Jordanian forces laid siege to the building in a residential part of Salt on Saturday night in a search for those responsible for a bomb attack on Friday on a police van.

The police vehicle had been maintaining security near a music festival in the majority Christian town of Fuhais, near the capital Amman and 15 kms (about 10 miles) from Salt.

Four security personnel were killed during the operation after the suspected militants sought sanctuary in the multi-storey building in Salt, a hillside city, the government said.

The side of the building partially collapsed, possibly because of a blast from a suicide bomber inside, a security source said.

No group has claimed responsibility for Friday's attack in Fuhais on the van in which one policeman was killed and six others were injured.

Militants from Islamic State and other radical jihadist groups have long targeted the U.S.-allied kingdom and dozens of militants are currently serving long prison terms.

King Abdullah, a Middle East ally of Western powers against Islamist militancy who has also safeguarded Jordan’s peace treaty with Israel, has been among the most vocal leaders in the region in warning of threats posed by radical groups.

Several incidents over the past few years have jolted the Arab kingdom, which has been comparatively unscathed by the uprisings, civil wars and Islamist militancy that have swept the Middle East since 2011.

It was not clear how many militants fled into the building which is in a busy residential quarter of the city. But five had now been rounded up in addition to three earlier, security sources said.

Part of the building was blown up by the militants, according to Ghunaimat and a security source said it was believed a suicide bomber had blown himself up causing its partial collapse.

Ghunaimat had earlier said search and rescue operations were being conducted to ensure no civilians were being held hostage in what was left of the building.

"The building in which the terrorist cell was found is about to fall and will be demolished to prevent a sudden collapse," Ghunaimat added.

The shoot-out also injured at least twenty people, including women and children living in the area. They had been taken overnight to a main hospital in the capital, a medical source said.

The security forces were investigating if the militants were part of a wider sleeper cell network of Islamist radicals that had planned a series of attacks, an official source said.

Jordan said this year that it had foiled an Islamic State plot that included plans for a series of attacks last November on security installations, shopping malls and moderate religious figures. It arrested the suspects.

Security forces have been extra vigilant with warnings that sympathisers of Islamic State could launch revenge attacks after the militants were driven out of most of the territory they once controlled in Syria and Iraq.

Intelligence officials and some experts believe widening social disparities and a perception of widespread official corruption is fuelling a rise in radicalisation among disaffected youths in a country with high unemployment and growing poverty.