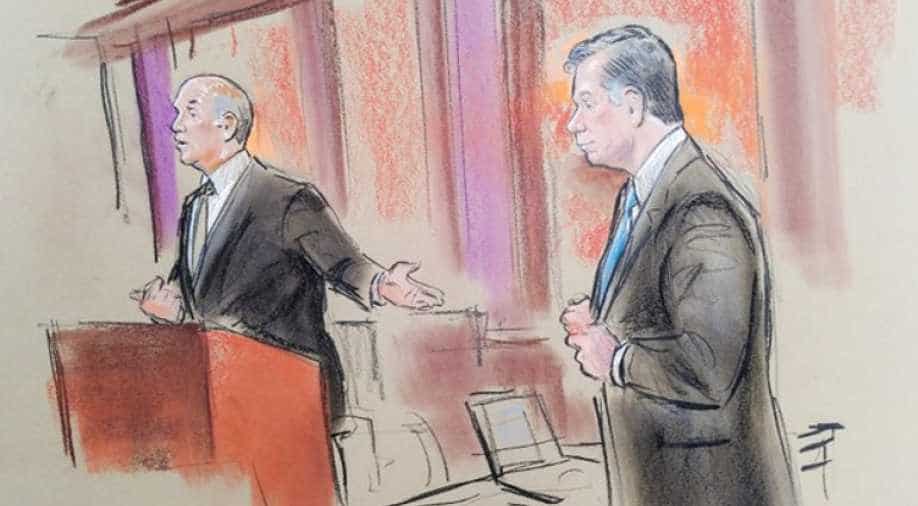 President Donald Trump's former campaign chief Paul Manafort considered himself to be "above the law," prosecutors said Tuesday as his high-profile trial on bank and fraud charges began.

Manafort, 69, is the first defendant to go to court to fight charges stemming from Special Counsel Robert Mueller's investigation into Russian interference in the 2016 election.

But the veteran Republican operative is not on trial for anything he did while serving for three months as the chairman of Trump's presidential campaign.

Instead, Manafort is in court for alleged crimes related to his lobbying activities on behalf of the former Russian-backed government of Ukraine.

"A man inside this courtroom believed the law did not apply to him," Assistant US Attorney Uzo Asonye said in his opening statement to the six-man six-woman jury in the Alexandria, Virginia courtroom.

"Paul Manafort placed himself and his money above the law," Asonye said.

The prosecutor accused Manafort of seeking to hide millions of dollars from his Ukrainian lobbying efforts from the Internal Revenue Service and failing to report his foreign bank accounts.

"All of these charges boil down to one simple issue -- that Paul Manafort lied," Asonye said.

He also went into detail about Manafort's spending -- including a $15,000 jacket made of ostrich -- before US District Judge T.S. Ellis cut him off saying this was not a crime.

Manafort's defense lawyers appeared to plan to place the blame on his former business partner Rick Gates, who was also charged by Mueller but pleaded guilty to lesser charges and is cooperating with prosecutors.

"Rick was handling the financial operations while he was lining his own pockets."

The trial is expected to last about three weeks.

Graying at the temples and somewhat leaner after a month in prison, Manafort was dressed in a dark suit and white shirt.

He appeared relaxed in court, conferring with his lawyers, taking notes and smiling occasionally at the judge's light-hearted remarks.

A few anti-Trump protesters gathered outside the courthouse holding signs reading "Lock Him Up," "It's Mueller Time" and "Trump Wouldn't Spend One Second In Prison For You."

Angelique Brickner, a 53-year-old artist, and her 17-year-old daughter were among the members of the public who snared seats in the packed courtroom.

"I came here because I want to see justice done and prove to my daughter that there is justice when the world is upside down," Brickner said.

Manafort, who helped Republicans Gerald Ford and Ronald Reagan reach the White House, was Trump's campaign chairman from May to August 2016, when he was forced to step down amid questions about his lobbying work for Ukraine's former pro-Russian leader Viktor Yanukovych.

Mueller has indicted more than 30 people -- including 26 Russians -- in connection with his probe into whether members of Trump's campaign colluded with Russia to help get the real estate tycoon elected.

Trump has denounced the probe as a politically motivated "witch hunt" and denied there was any collusion with Moscow to defeat Democratic presidential nominee Hillary Clinton.

"Collusion is not a crime, but that doesn't matter because there was No Collusion (except by Crooked Hillary and the Democrats)," Trump tweeted.

While Gates and others have pleaded guilty, Manafort has refused to strike a deal and has insisted on having his day in court.
Legal experts said Manafort may be holding out hopes of a pardon from Trump.

Jonathan Turley, a law professor at George Washington University, said the odds are stacked heavily against Manafort and he may be "playing a pardon strategy."

"He may feel that he doesn't have much to lose in going to trial and preserving his chances for a pardon," Turley said. "If he cooperates with Mueller, a pardon is going to be substantially reduced in likelihood."

Manafort has spent the past month in prison after having his house arrest revoked by a federal judge for allegedly tampering with witnesses in another pending case.

He is scheduled to go on trial in September on separate charges brought by Mueller of conspiracy, money laundering and failing to register as an agent of a foreign government.