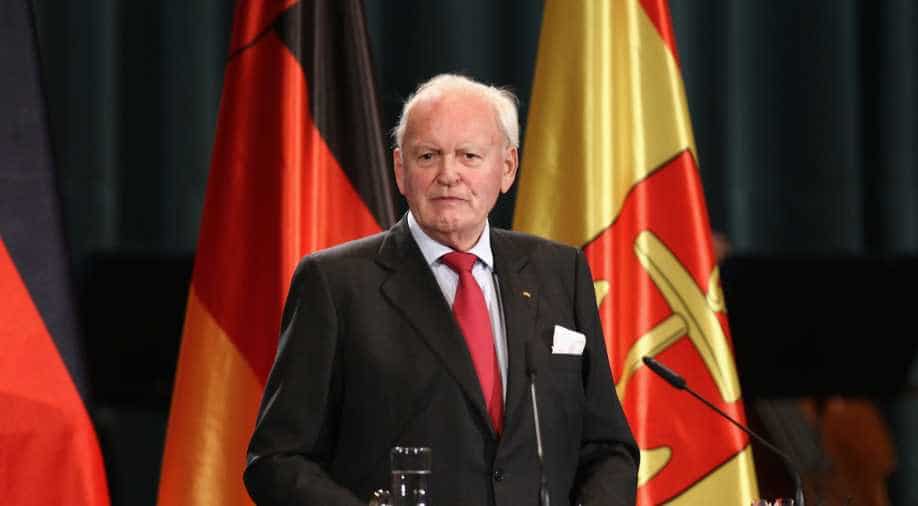 Herzog is also remembered for travelling to Poland as soon as he assumed his post to ask for forgiveness on the 50th anniversary of the 1944 Warsaw uprising. Photograph:( Getty )

Former German president Roman Herzog, best remembered for urging "a jolt" of political and social reform in his country, has died at the age of 82, the presidential office said Tuesday.

He died in the early hours of Tuesday in a hospital near his hometown in the southwestern state of Baden-Wurttemberg, a spokeswoman said.

Herzog, a former conservative regional politician and chief judge of Germany's constitutional court, served as head of state, a largely ceremonial but influential post, from 1994-99.

He is best remembered for the phrase "Germany needs a jolt" from his 1997 Berlin speech "Moving into the 21st century" in which he warned that a country scared of change would go under in a globalised world.

"Everyone is addressed, everyone has to make sacrifices, everyone has to participate," he implored the nation, a year before centre-left chancellor Gerhard Schroeder would take power and implement sweeping social welfare and labour reforms.

Germany's current chancellor Angela Merkel praised Herzog as a "patriot" who had served the country in multiple posts and was "plain-spoken, unpretentious, humorous, and quite self-ironic".

Herzog, who was born in the southern state of Bavaria and grew up under the Nazi regime, is also remembered for travelling to Poland as soon as he assumed his post to ask for forgiveness on the 50th anniversary of the 1944 Warsaw uprising.

The following year, half a century after the liberation of the Nazi death camp Auschwitz, he attended a Jewish ceremony at the site.

The World Jewish Congress on Tuesday honoured Herzog as a "great fighter for the rule of law and for a free and tolerant society".

Herzog had "distinguished himself with his great openness and friendship toward the Jewish community and for promoting its role in German civil society," said Maram Stern, the WJC`s deputy CEO, in a statement.

"With expertise, wisdom and great life experience, he served our country and its liberal constitution."

Foreign Minister Frank-Walter Steinmeier -- who is set to take over the presidency next month -- described Herzog as "a straight-forward, honest, and intelligent man who was not afraid to speak the truth on hard issues but also never lost his profound sense of humor."

Herzog had two sons with his first wife, Christiane, who died in 2000.