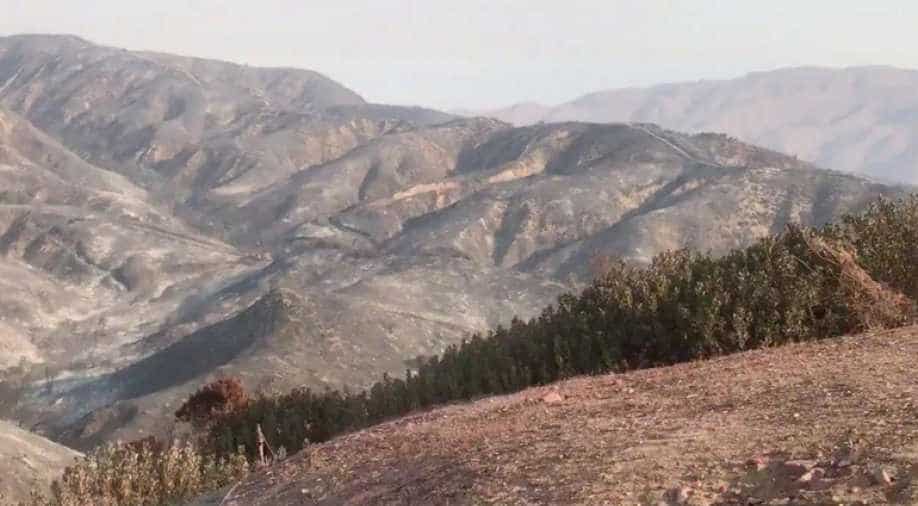 A general view of the aftermath from the Holy fire, in McVicker Canyon, California, US. Photograph:( Reuters )

A break in the brutal heat wave that has baked California for much of the summer gave firefighters a chance to attack a string of major wildfires burning across the state that have killed eight people and destroyed thousands of homes.

The cooler temperatures, down from triple digits across much of Northern California, came during a two-day tour of devastated neighbourhoods by two Trump administration officials, US&nbspInterior Secretary Ryan Zinke and US&nbspAgriculture Secretary Sonny Perdue.

Zinke told local KRCR-TV during the visit that the intensity of this year's fire season, one of the worst in California in more than a decade, showed the need for clearing underbrush and removing dead trees.

"We have to remove the dead and dying trees and restore health to our forests,” he told the station.

Zinke and Perdue also met with fire officials. Some 110 major wildfires are burning across the western United States and have burned more than 8,900 square miles (23,000 square kilometres), an area larger than the state of New Jersey, according to National Interagency Fire Center.

The conflagrations have forced tens of thousands of people to flee their homes and shuttered national parks.

As of Monday, the Carr Fire, which has blackened some 203,000 acres (82,000 hectares) and killed eight people in and around Shasta County, north of Sacramento near the Oregon state line, was 61 per cent contained as of Monday afternoon, according to the California Department of Forestry and Fire Protection.

About 130 miles (160 km) away, crews had cut buffer lines around 68 per cent of the largest wildfire recorded in California history, the Mendocino Complex, which has already charred some 344,000 acres.

In Southern California, the Holy Fire, which authorities say was set on August 6 by a disgruntled homeowner in an Orange County canyon, was 52 per cent contained after torching more than 22,000 acres and destroying a dozen cabins.

The increasing containment was good news but did not necessarily mean the wildfire season was quieting down, Cal Fire spokesman Cary Wright said.

"A lot of this is determined based on the drought, Mother Nature, what kind of winds we get," Wright said.

"With low humidity, high heat and low moisture, fire season just seems to be getting longer and longer." Though temperatures had dropped from their triple-digit highs, they expected to remain at above 90 Fahrenheit (32 Celsius) through Friday across Northern California.