FBI agent who criticised Trump in text messages is fired 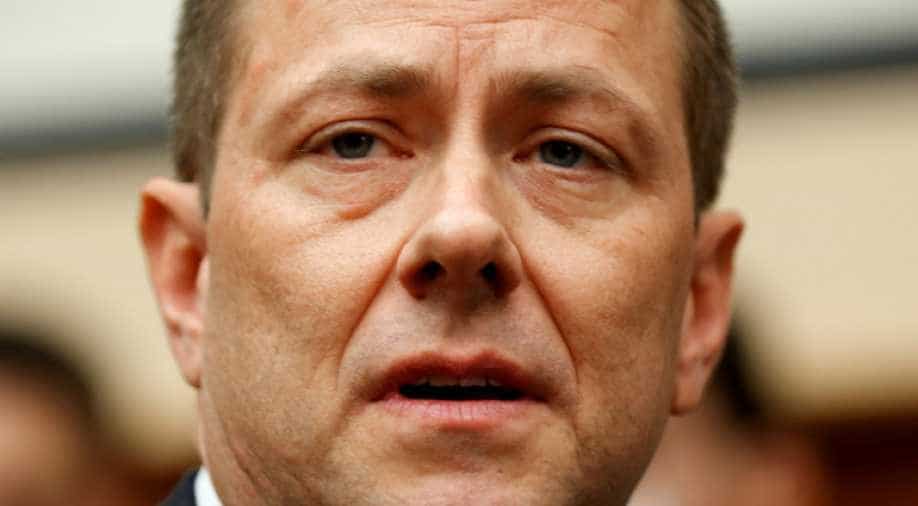 Peter Strzok, the FBI agent who came under fire from President Donald Trump and other Republicans for sending text messages that disparaged the candidate during the presidential campaign, was fired late on Friday, his attorney said on Monday.

Strzok is the third high-ranking person to be fired from the Federal Bureau of Investigation during the Trump administration, including former Director James Comey. During his FBI career, Strzok rose to deputy assistant director, focusing on counterintelligence.

Strzok's attorney, Aitan Goelman, said in a statement that FBI Deputy Director David Bowdich made the decision to terminate his client.

The decision, Goelman added, was at odds with a recommendation by the FBI's Office of Professional Responsibility, which had called for Strzok to face a 60-day suspension and demotion from his supervisory responsibilities.

He also said it went against promises that FBI Director Christopher Wray made in the past about adhering to proper processes on personnel matters.

The FBI said in a statement it had followed its standard review and disciplinary process after the inspector general referred the Strzok case to the FBI's Office of Professional Responsibility.

"OPR reviewed the investigative materials, as well as the written and oral responses of Mr. Strzok and his counsel, and issued OPR's decision. The deputy director, as the senior career FBI official, has the delegated authority to review and modify any disciplinary findings ... as deemed necessary," the statement said.

Strzok's attorney Goelman, however, said that normally FBI personnel can appeal such decisions to a five-person review board. Goelman said the appeals step was bypassed in Strzok's case and the FBI did not follow the normal course afforded to other FBI agents.

Trump took to Twitter not long after the news broke on Monday.

"Agent Peter Strzok was just fired from the FBI-finally," wrote Trump, who had called for Strzok's ouster before.

"The list of bad players in the FBI & DOJ gets longer & longer."

Agent Peter Strzok was just fired from the FBI - finally. The list of bad players in the FBI & DOJ gets longer & longer. Based on the fact that Strzok was in charge of the Witch Hunt, will it be dropped? It is a total Hoax. No Collusion, No Obstruction - I just fight back!

Just fired Agent Strzok, formerly of the FBI, was in charge of the Crooked Hillary Clinton sham investigation. It was a total fraud on the American public and should be properly redone!

"All funds raised on this GoFundMe will be put into a trust dedicated to covering Pete’s hefty – and growing – legal costs and his lost income," the fundraising website says.

Goelman said that his client's firing was politically motivated and that his texts represented political speech protected by the First Amendment.

In March, Attorney General Jeff Sessions fired FBI Deputy Director Andrew McCabe after a scathing report by the Justice Department's internal watchdog concluded he had leaked information to reporters and misled investigators about his actions.

Comey was fired by Trump in May 2017 after Deputy Attorney General Rod Rosenstein helped write a memo that was critical of how Comey handled the FBI's probe into then-Secretary of State Hillary Clinton's use of a private email server for official business.

Later, however, Trump claimed he fired Comey over that "Russia thing," apparently referring to the FBI probe into whether his presidential campaign colluded with Russia. Trump has repeatedly denied any collusion and called the investigation a witch hunt.

Both Comey and McCabe said, however, they believe they were fired because they are key witnesses in Special Counsel Mueller's probe into whether Trump may have tried to obstruct the investigation.

Strzok was deeply involved in the FBI's Clinton email investigation and was temporarily assigned to Mueller's office. He was removed from that post after his texts came to light.

The texts were criticized by the Justice Department's inspector general in a recent report that examined the FBI's handling of the Clinton email probe. Republicans in Congress have repeatedly pointed to them as evidence the FBI is biased against Trump.