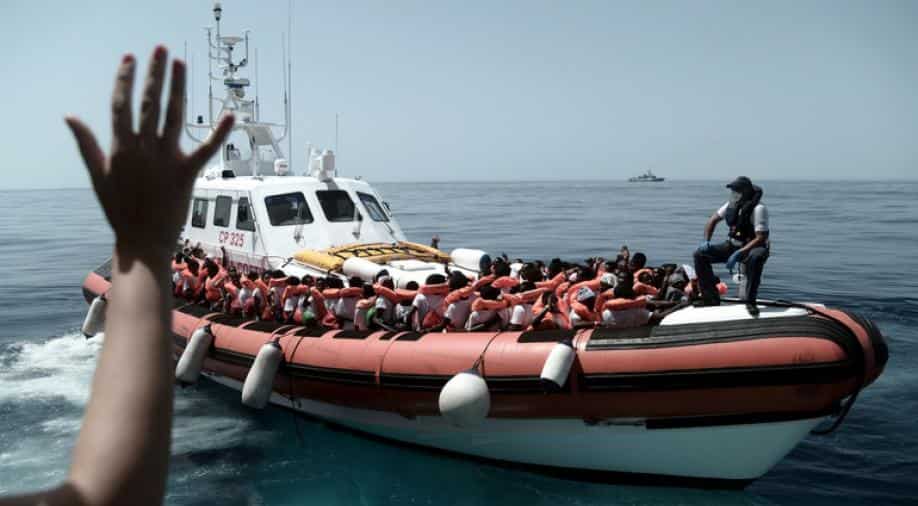 European countries faced pressure on Tuesday to resolve a fresh standoff with the operators of the migrant rescue ship Aquarius which is stranded for the second time in the Mediterranean carrying 141 people.

France said it was in touch with other EU nations to "rapidly" find a port where the Aquarius could dock after it was refused entry by Italy and Malta, the two countries closest to its current location.

The Aquarius, which was left stranded with 630 migrants on board in June after being turned away by Rome and Valletta, resumed rescue operations off the Libyan coast last week.

In a statement late on Monday, French President Emmanuel Macron's office voiced disapproval of Italy's "very tough political stance" -- milder language than two months ago when he accused the populist government of "cynicism and irresponsibility".

The 141 migrants on board the Aquarius were picked up on Friday in two separate operations and are in a stable condition, the French charity that operates the Aquarius, SOS Mediterranee, said.

In the first rescue, 25 people were plucked from a wooden boat bobbing on the seas off the Libyan coast, while another 116 were rescued from another larger vessel later in the day.

The second boat was overloaded and more than half of the passengers were unaccompanied children, mostly from Somalia and Eritrea. They had no food or water supplies at the time of their rescue, SOS Mediterranee said.

"We're asking all European countries to find a solution. We're asking them to be responsible and find a safe port in the Mediterranean," Sophie Beau, head of the charity, told AFP on Monday.

Tove Ernst, a spokesman for the European Commission, said Monday that it was in contact with "a number of member states" to find a "swift resolution" to the standoff.

Since June, Italy's new far-right Interior Minister Matteo Salvini has regularly turned away rescue ships operated by foreign NGOs, accusing them of playing into the hands of people smugglers.

On Saturday, he said the Aquarius would "never see an Italian port" again, accusing it of encouraging smugglers and migrants to take to the water in the knowledge that they will be rescued.

The Italian coast guard continues to rescue migrants, however.

Malta's government defended its decision to turn away the Aquarius, saying it was "neither the coordinating nor the competent authority for such a rescue" and had "no legal obligation" to provide a place of safety.

The government of Gibraltar also announced late Monday that the ship would no longer be allowed to operate under its maritime flag after being registered on the British overseas territory in 2009.

The increasingly hostile stance reflects hardening public opinion towards migrants in Europe following the arrival of hundreds of thousands of people fleeing war or poverty in Africa and the Middle East.

For years, Italy pleaded with its EU partners for help with a massive influx of arrivals that has seen 700,000 people land in the country since 2013.

The new Italian policy of turning back charity boats sparked a furious row among EU members in June, which was resolved when Spain, under a new Socialist government, offered to take in the Aquarius passengers.

A Spanish government source told AFP on Monday that the country did not intend to repeat the gesture by allowing the Aquarius to dock in Valencia, saying that "it is not the safest port" for the ship.

France's Macron was criticised by left-wing opponents in June for failing to offer a safe haven in France -- it was the next closest country to the boat after Italy and Malta.

Local leaders on the French island of Corsica have offered to welcome the migrants, as has the port of Sete on the mainland -- but the invitations would need to be approved by the government in Paris.

"If the closest ports are closed, then others that are closer need to open," the head of the Corsican local assembly, Jean-Guy Talamoni, told the BFM channel on Tuesday.

"We left Italy alone to deal with the problem, but it's a problem for the whole of Europe," Talamoni added.

France took in 78 of the migrants on board the Aquarius in June after they landed in Spain.

French public opinion was against accepting the Aquarius during the first crisis and the right-wing Republicans party and far-right National Rally both argued on Tuesday against allowing the boat to dock.

A spokesman for the National Rally suggested the ship should head for a port in Tunisia.