Emma Stone and Steve Carell in 'Battle of the Sexes' 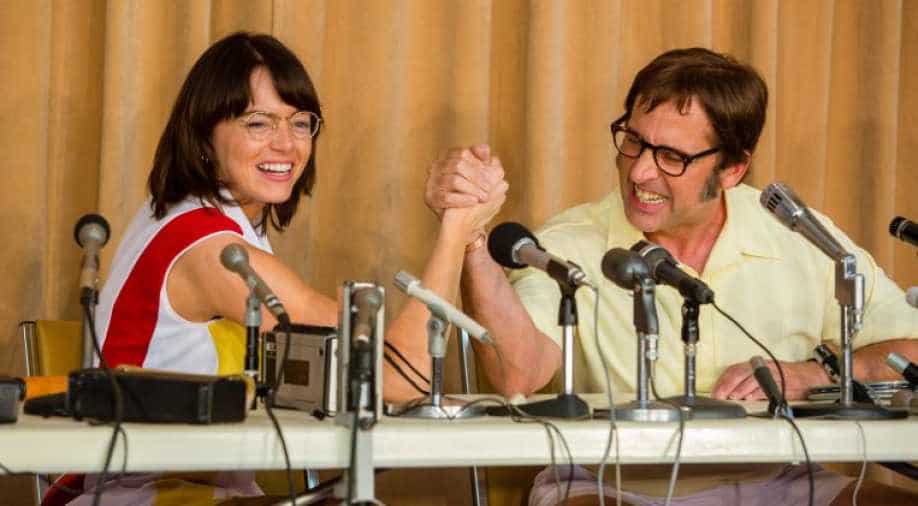 Emma Stone and Steve Carell in "Battle of the Sexes." Photograph:( Twitter )

Documenting one of the most epic tennis matches, an upcoming movie "Battle of Sexes" will star Emma Stone as Billie Jean King and Steve Carell as Bobby Rings.

Both Bobby Riggs and Billie Jean King became international profiles after the much-publicised match between them dubbed as the "Battle of the Sexes" had the world's attention. On September 20, 1973, women's tennis star faced off against Bobby Riggs in an exhibition match. The 55-year-old Bobby Riggs, a former Wimbledon champion, believed he could still beat any woman player. This led to the epic match between Riggs and King. Riggs hyped the contest with a barrage of misogynistic comments, including that “the best way to handle women is to keep them pregnant and barefoot.”

Billie Jean King ended up eviscerating him 6-4, 6-3, 6-3 in front of more than 30,000 fans at the Houston Astrodome, which was then the largest crowd ever to watch a tennis match. Her victory and the passage of Title IX, an anti-gender-discrimination law, at that time is today credited with giving a boom to women’s sports.

Depicting their battle, the stars have been given award-level makeup and wardrobe while the actors give their characters a life with great acting.

The movie is directed by Jonathan Dayton and Valerie Faris with screenwriter Simon Beaufoy who alternate between the stories of Billie Jean King and Bobby Riggs. The plotline runs of parallel tracks for the first half of the film.