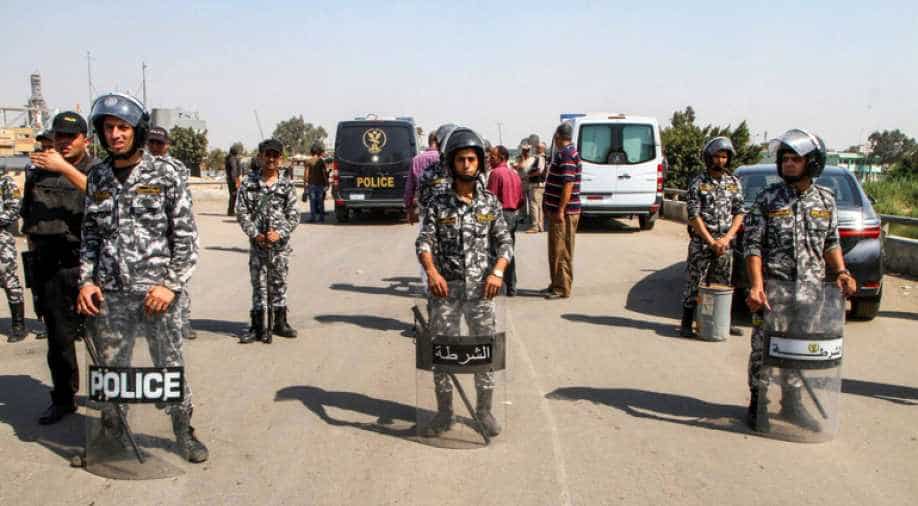 Members of the Egyptian security forces form a perimeter for investigators gathered around the body of a suicide bomber. Photograph:( AFP )

Six suspected Islamist militants were killed in an Egyptian police raid on their hideout in a suburb west of Cairo, the interior ministry said Monday.

The alleged jihadists died in a shootout after opening fire on security forces in the October 6 district, it said in a statement.

The ministry said it had received information that the suspects were planning attacks on vital installations, Christian places of worship and security personnel.

The statement did not specify when the raid took place or whether the suspected militants were affiliated with any specific group.

The raid follows a failed suicide attack against a church close to Cairo on Saturday when officials said a bomber blew up just short of reaching his target because of tight security.

The interior ministry announced Sunday that security forces had arrested six members of a "terrorist cell" behind that attempted attack.

Jihadists launched an insurgency in Sinai after the 2013 military overthrow of Egypt's Islamist president Mohamed Morsi, forced out by the military in the face of mass protests against his rule.

Attacks have also taken place elsewhere in the country, including in Cairo.

The army in February launched a major operation focused on the Sinai peninsula in eastern Egypt to wipe out jihadists, including the Islamic State group.