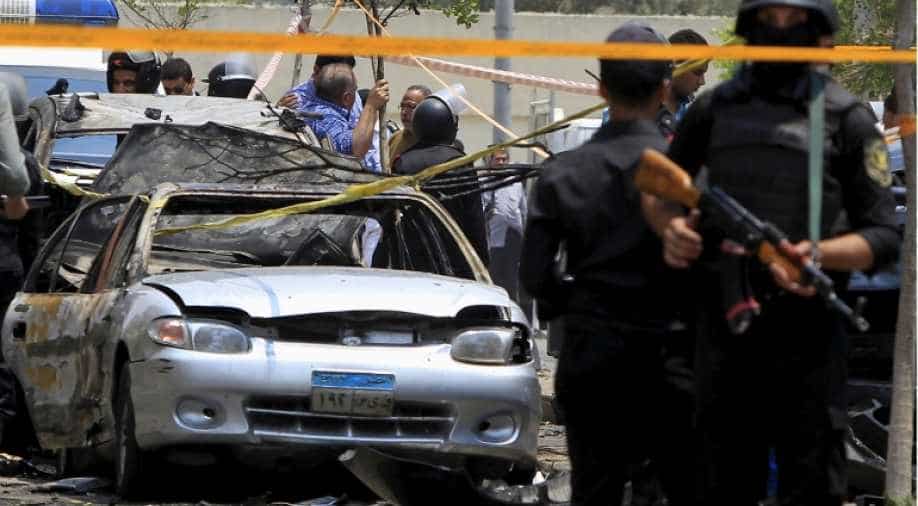 Policemen secure the site of a car bomb attack on the convoy of Egyptian public prosecutor Hisham Barakat near his house at Heliopolis district in Cairo, Egypt. Photograph:( Reuters )

The men were among a group of 28 who were sentenced to death in the case in 2017. Public prosecutor Hisham Barakat was killed in a car bomb attack on his convoy in the capital, Cairo.

Egyptian authorities executed nine men convicted over the 2015 killing of the country's chief prosecutor on Wednesday amid a surge in the number of death sentences carried out this month, lawyers, activists and officials said.

The men were among a group of 28 who were sentenced to death in the case in 2017. Public prosecutor Hisham Barakat was killed in a car bomb attack on his convoy in the capital, Cairo.

Egypt blamed the Muslim Brotherhood and Gaza-based Hamas militants for the operation. Both groups denied having a role.

"These executions are a stark demonstration of the government's increasing use of the death penalty," said Amnesty International, which had appealed on Tuesday for authorities not to carry out the executions.

"Egyptian authorities must urgently halt this bloody execution spree which has seen them repeatedly putting people to death after grossly unfair trials in recent weeks."

The rights group cited testimony by the defendants that they had been secretly detained and tortured into confessing.

Only a small proportion have been carried out, though the rate of executions has risen since 2015, rights activists say.

The executed men were brought to a morgue where families -- who said they had not been informed about the execution date in advance -- waited anxiously for several hours on Wednesday afternoon to recover their bodies.

Ghada Mohamed el Abassy, the mother of one of those executed, said she had learnt about the execution from a TV report. She said she hadn't seen her son in more than one year because she was not allowed to visit him in custody.

"We are in a country where humans have no value. If we were of value to them they wouldn't have deprived us of visiting them for years," she said.

A police official at the morgue said authorities don’t inform relatives before executions "for security reasons".

"We can’t tell them of the date, no one knows, even the prisoners are not told, they can commit suicide if we tell them," he said.

Officials at the morgue confirmed the executions had been carried out on Wednesday morning.

In both cases, the defendants or their lawyers had said torture was used to extract confessions, according to Amnesty International.

The latest executions took place two days after three policemen were killed in Cairo after cornering the alleged perpetrator of an attempted attack against a police patrol in the capital last Friday.

The executions "suggest a troubling trend on the part of the government in which executions appear to be tools of revenge following terrorist attacks rather than a part of an orderly criminal justice system," said Timothy Kaldas, a non-resident fellow at the Tahrir Institute for Middle East Policy.

Sisi, who was elected president in 2014 and re-elected last year, says he is working to bring stability and security to Egypt following the turmoil of the 2011 uprising.