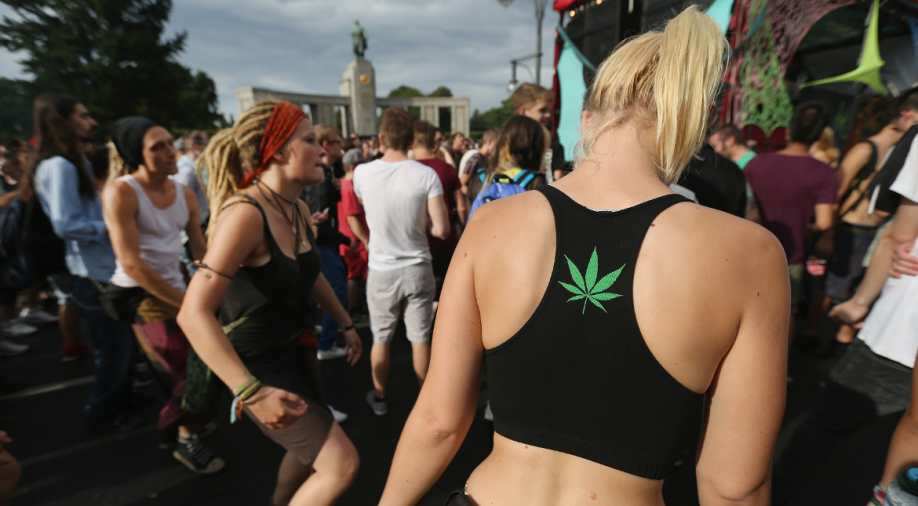 The measure allows private businesses in Colorado's capital to seek permits to create areas where customers can bring their own cannabis and consume it. However, applicants would first need to receive backing from a local business group. Photograph:( Getty )

Denver has become the first city in the United States to legalise the social use of cannabis in businesses, including bars, yoga studios and art galleries.

The new ordinance was part of several marijuana measures put to voters in nine US states during last week's general election. Denver officials said on Tuesday that Initiative 300 had garnered enough votes to pass after nearly all the ballots had been counted.

The measure allows private businesses in Colorado's capital to seek permits to create areas where customers can bring their own cannabis and consume it. However, applicants would first need to receive backing from a local business group or neighbourhood.

"This is absolutely historic and ground-breaking," said Emmett Reistroffer, a key proponent of the measure and a cannabis consultant in Denver. "We are the first in the United States and potentially the first place in the world to regulate the consumption of cannabis."

He told AFP that the vote was in line with a measure approved by the state four years ago allowing the recreational use of marijuana by adults.

"Essentially what we passed is a continuation of that same belief that adults should be able to use and socialise with cannabis as they are able to do with alcohol," Reistroffer said.

The city's trailblazing measure comes as more and more states across America move to legalise cannabis either for medical or recreational use. California, the nation's most populous state, last Tuesday handed a major victory for backers of legalisation by approving recreational use of the drug. Massachusetts approved a similar measure.

According to industry professionals, the marijuana market in the United States could expand to $23 billion by 2020, compared to $5.7 billion in 2015.

In Denver, the new ordinance will be implemented as part of a four-year pilot program that will test the concept and determine its long-term feasibility. Opponents, including Colorado's governor and former Denver mayor John Hickenlooper, had argued that it would encourage the public use of marijuana, which is banned on the state and federal level, and harm public safety.

"I look at it as the camel's nose getting under the tent flap," Hickenlooper told the Denver Post before the vote. Protect Denver's Atmosphere, a group which also opposed the ballot measure, urged city officials to tread carefully in issuing licenses to businesses.

"Initiative 300 allows the concurrent consumption of marijuana and alcohol, which can lead to greater impairment than the use of either substance alone," Rachel O'Bryan, campaign manager for the group, said in a statement.

"It will also allow the public consumption of slow-acting marijuana edibles and highly potent marijuana concentrates," she added. "How can these businesses possibly monitor patrons for marijuana intoxication?" She also noted that the initiative had received less backing from voters than the bill legalising recreational marijuana use in 2012.

The Denver Post, which supported the bill, in an editorial also called for caution as local officials "move forward with this experiment".

"But right now Denver is struggling with a public consumption problem, some who want to consume have no place to go, legally," the editorial said. "It's a problem that should get solved sooner rather than later, now that voters have spoken."

Supporters of the marijuana ordinance stressed that the measure is so restrictive that it is unlikely that pot smoking will flourish in public places where food and alcohol are served.

"I don't see this coming to a lot of restaurants," Reistroffer said. "I see it happening in certain art galleries, concert venues and even comedy houses where adults go for generally adult entertainment."