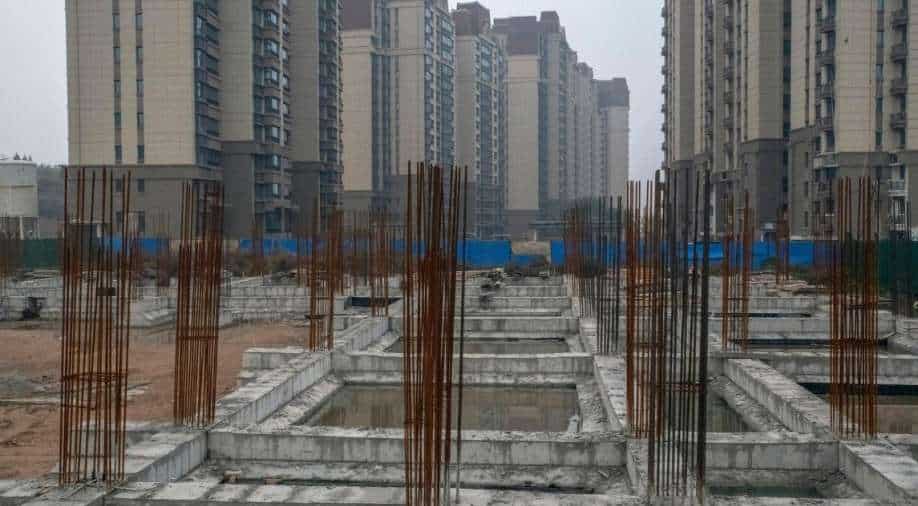 FILE — An idle construction site for an Evergrande residential project in Taiyuan, China, and completed buildings behind on Oct. 20, 2021. China Evergrande Group is only the largest and most visible of a lengthening list of real estate developers in China that have run into severe financial difficulty lately. (Gilles Sabrié/The New York Times). Photograph:( The New York Times )

Next month, China hosts the Winter Olympics in Beijing, which will focus an international spotlight on the country’s performance

Construction and property sales have slumped. Small businesses have shut because of rising costs and weak sales. Debt-laden local governments are cutting the pay of civil servants.

China’s economy slowed markedly in the final months of last year as government measures to limit real estate speculation hurt other sectors as well. Lockdowns and travel restrictions to contain the coronavirus also dented consumer spending. Stringent regulations on everything from internet businesses to after-school tutoring companies have set off a wave of layoffs.

China’s National Bureau of Statistics said Monday that economic output from October through December was only 4% higher than during the same period a year earlier. That represented a further deceleration from the 4.9% growth in the third quarter, July through September.

The world’s demand for consumer electronics, furniture and other home comforts during the pandemic has produced record-setting exports for China, preventing its growth from stalling. Over all of last year, China’s economic output was 8.1% higher than in 2020, the government said. But much of the growth was in the first half of last year.

The snapshot of China’s economy, the main locomotive of global growth in the past few years, adds to expectations that the broader world economic outlook is beginning to dim. Making matters worse, the omicron variant of the coronavirus is now starting to spread in China, leading to more restrictions around the country and raising fears of renewed disruption of supply chains.

The slowing economy poses a quandary for China’s leaders. The measures they have imposed to address income inequality and rein in companies are part of a long-term plan to protect the economy and national security. But officials are wary of causing short-term economic instability, particularly in a year of unusual political importance.

Next month, China hosts the Winter Olympics in Beijing, which will focus an international spotlight on the country’s performance. In the fall, Xi Jinping, China’s leader, is expected to claim a third five-year term at a Communist Party congress.

With growth in his country slowing, demand slackening and debt still at near-record levels, Xi could face some of the biggest economic challenges since Deng Xiaoping began lifting the country out of its Maoist straitjacket four decades ago.

“I’m afraid that the operation and development of China’s economy in the next several years may be relatively difficult,” Li Daokui, a prominent economist and Chinese government adviser, said in a speech late last month. “Looking at the five years as a whole, it may be the most difficult period since our reform and opening up 40 years ago.”

China also faces the problem of rapid aging, which could create an even greater burden on China’s economy and its labor force. The National Bureau of Statistics said Monday that China’s birthrate fell sharply last year and is now barely higher than the death rate.

As costs for many raw materials have risen and the pandemic has prompted some consumers to stay home, millions of private businesses have crumbled, most of them small and family owned.

That is a big concern because private companies are the backbone of the Chinese economy, accounting for three-fifths of output and four-fifths of urban employment.

Kang Shiqing invested much of his savings nearly three years ago to open a women’s clothing store in Nanping, a river town in southeastern China’s Fujian province. But when the pandemic hit a year later, the number of customers dropped drastically and never recovered.

As in many countries, there has been a broad shift in China toward online shopping, which can undercut stores by using less labor and operating from inexpensive warehouses. Kang was stuck paying high rent for his store despite the pandemic. He finally closed it in June.

“We can hardly survive,” he said.

Another persistent difficulty for small businesses in China is the high cost of borrowing, often at double-digit interest rates from private lenders.

Chinese leaders are aware of the challenges private companies face. Premier Li Keqiang has promised further cuts in taxes and fees to help the country’s many struggling small businesses.

On Monday, China’s central bank made a small move to reduce interest rates, which could help reduce slightly the interest costs of the country’s heavily indebted real estate developers. The central bank pushed down by about a tenth of a percentage point its interest rate bench marks for one-week and one-year lending.

The building and fitting out of new homes has represented one-quarter of China’s economy. Heavy lending and widespread speculation have helped China erect the equivalent of 140 square feet of new housing for every urban resident in the past two decades.

This autumn, the sector faltered. The government wants to limit speculation and deflate a bubble that had made new homes unaffordable for young families.

China Evergrande Group is only the largest and most visible of a lengthening list of real estate developers in China that have run into severe financial difficulty lately. Kaisa Group, China Aoyuan Property Group and Fantasia are among other developers that have struggled to make payments as bond investors become more wary of lending money to China’s real estate sector.

As real estate companies try to conserve cash, they are starting fewer construction projects. And that has been a big problem for the economy. The price of steel reinforcing bars for the concrete in apartment towers, for example, dropped by one-quarter in October and November before stabilizing at a much lower level in December.

The decline in home prices in smaller cities has hurt the value of people’s assets, which in turn made them less willing to spend. Even in Shanghai and Beijing, apartment prices are no longer surging.

There have been faint hints of renewed government support for the real estate sector in recent weeks, but no sign of a return to lavish lending by state-controlled banks.

The financial distress of Evergrande “is a signal that money will be pushed from real estate to the stock market,” said Hu Jinghui, an economist who is the former chair of the China Alliance of Real Estate Agencies, a national trade group. “The policies can be loosened, but there can be no return to the past.”

The slowdown in the housing market has also hurt local governments, which rely on land sales as a key source of revenue.

The International Monetary Fund estimates that government land sales each year have been raising money equal to 7% of the country’s annual economic output. But in recent months, developers have curtailed land purchases.

Starved of revenue, some local governments have halted hiring and cut bonuses and benefits for civil servants, prompting widespread complaints on social media.

In Hangzhou, the capital of Zhejiang province, a civil servant’s complaint of a 25% cut in her pay spread quickly on the internet. The municipal government did not respond to a fax requesting comment. In northern Heilongjiang province, the city of Hegang announced that it would not hire any more “low-level” workers. City officials deleted the announcement from the government’s website after it drew public attention.

Some governments have also raised fees on businesses to try to make up for the shortfall.

Bazhou, a city in Hebei province, collected 11 times as much money in fines on small businesses from October through December as it did in the first nine months of last year. Beijing criticized the city for undermining a national effort to reduce the cost of doing business.

Pockets of Strength in Exports

Some areas of consumer spending have been fairly robust, notably the luxury sector, with sports cars and jewelry selling well. Retail sales rebounded 12.5% last year compared to pandemic-depressed levels in 2020. But retail sales fell in December compared to November, as coronavirus restrictions kept some shoppers at home.

Some areas of consumer spending have been fairly robust, notably the luxury sector, with sports cars and jewelry selling well.

Few anticipate that the government will allow a severe economic downturn this year, before the Communist Party congress. Economists expect the government to soften its restrictions on lending and step up government spending.

“The first half of the year will be challenging,” said Zhu Ning, deputy dean of the Shanghai Advanced Institute of Finance. “But then the second half will see a rebound.”