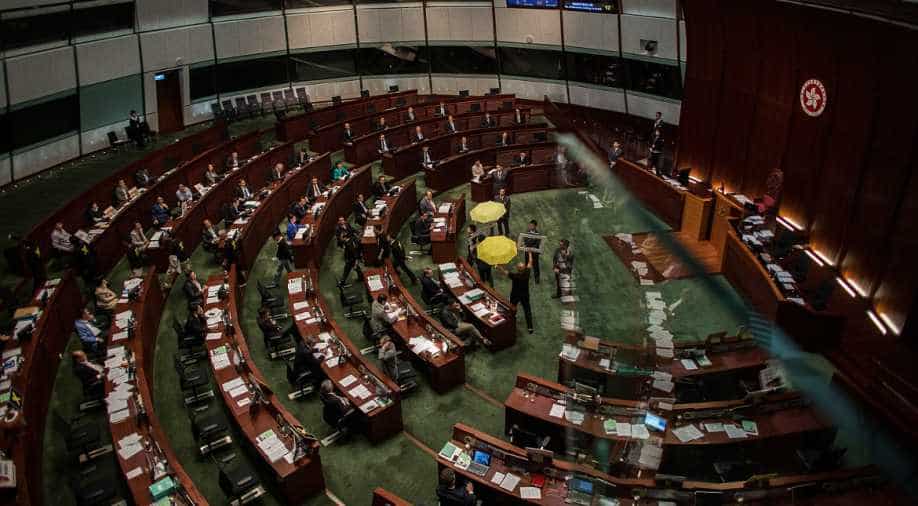 China effectively barred two elected pro-independence lawmakers from Hong Kong's legislature on Monday after they deliberately misread their oaths, saying that they could not be sworn in again.

An oath that did not conform to Hong Kong's law "should be determined to be invalid, and cannot be retaken", the Communist-controlled National People's Congress (NPC) in Beijing said in a rare interpretation of the semi-autonomous city's constitution.

Legislators had to be "sincere and solemn" when taking their oaths, and had to pledge "completely and solemnly" to uphold the Basic Law of Hong Kong as part of the People's Republic of China, the NPC declared at the Great Hall of the People on Tiananmen Square.

The question has become hugely sensitive in Hong Kong, the former British colony which returned to Chinese rule in 1997 under a promise of "one country, two systems" for 50 years.

There are deep concerns those liberties, enshrined in the city's constitution known as the Basic Law, are under threat, and mass protests two years ago demanded greater democracy.

Beijing sees any talk of independence as treasonous and the official Xinhua news agency quoted a spokesman for the government's Hong Kong and Macao Affairs Office welcoming the ruling.

"The interpretation demonstrates the central government's firm determination and will in opposing 'Hong Kong independence,'" the spokesperson said, adding that it "complies with the common aspiration of the entire Chinese people, including the compatriots in Hong Kong".

Hong Kong police used pepper spray Sunday to drive back hundreds of protesters angry at China's decision to intervene in the row.

In chaotic scenes reminiscent of the demonstrations of 2014, protesters charged metal fences set up by police outside China's liaison office in the city.

Monday's announcement was the fifth time since the handover that China has interpreted the Basic Law.

Li Fei, the chairman of the Basic Law Committee of the NPC Standing Committee, told reporters: "These Hong Kong independence figures are going against the country and splitting the country. How can they uphold Hong Kong's Basic Law?"

"I hope people can see the real face of these people," he added.

Both those promoting independence and those arguing for self-determination were supporting separatism, he said -- anathema to China's ruling party.

Ahead of the ruling, the state-run Global Times newspaper, which often takes a nationalistic tone, backed Beijing's intervention.

Leung and Yau, it said in an editorial "publicly disgraced this country and advocated Hong Kong does not belong to China".

Their actions had "caused divisions in society", it said, adding: "A few people of radical opposition are creating chaos among public opinion and affected the understanding of some Hong Kong people. The fallacies they created must be cleaned up."

Yau and Leung were among several lawmakers advocating self-determination or independence who won seats in citywide polls in September.

The pair have yet to be sworn into Legco, after their first oath attempt last month was declared invalid. They draped themselves in banners reading "Hong Kong is not China" and altered the wording of their pledges to include derogatory terms and expletives.