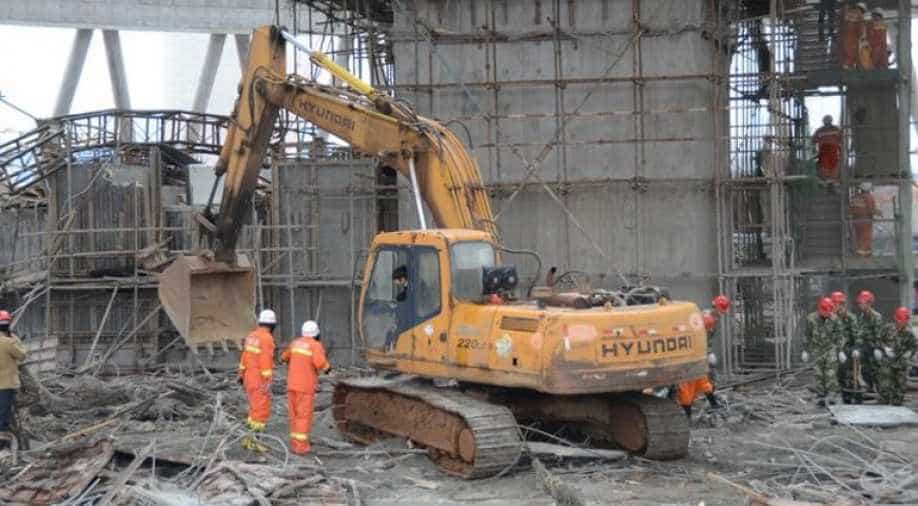 The company had sought to ?expedite construction progress? on the expansion project in September, previous statements on its website showed. Photograph:( Reuters )

The death toll from a collapse at a power station under construction in China has risen to 74, state media said Friday, as web users expressed outrage over the country's latest industrial accident.

A platform more than 70 metres (230 feet) high in a cooling tower at the Ganneng Fengcheng power station in the eastern province of Jiangxi crashed to the ground early Thursday.

The official Xinhua news agency said 74 people had been confirmed dead, the youngest of the identified aged 23, and two injured.

The vice governor of Jiangxi, Li Yihuang, and two other officials bowed to pay their respects to the victims at a press conference, offering their condolences to the families and saying they felt "very sad" about the accident, footage showed.

Pictures of the scene in Fengcheng showed a grey mass of concrete slabs, steel girders and twisted metal splayed in a heap on the ground inside a large round structure.

Hard-hatted rescue workers in neon jumpsuits carried bodies out from the site on stretchers wrapped in orange sheeting.

Commenters on Chinese social media condemned the latest accident in a country with a dire industrial safety record, demanding that the cause be identified and those responsible punished.

"This is too cruel, devastating 74 families completely with a man-made disaster," said one poster on China's Twitter-like Weibo. "90 per cent of them are the pillars of their family.”

Another added: "What it revealed is the severe indifference and disrespect to every worker’s dignity and life. Look at these victims and the managers who were in charge of their lives -- can you still sit still?"

Official figures show 66,182 people were killed in workplace accidents in 2015.

The tower, with a design height of 165 metres, was part of a 7.67 billion yuan ($1.1 billion) project to expand the coal-powered electricity generating plant.

One of the investors involved, Jiangxi Ganneng, saw its shares tumble nearly six per cent on the Shenzhen stock exchange on Friday morning after saying it will “take any measures necessary to reduce the accident’s impact on the firm”.

The company had sought to “expedite construction progress” on the expansion project in September, previous statements on its website showed.