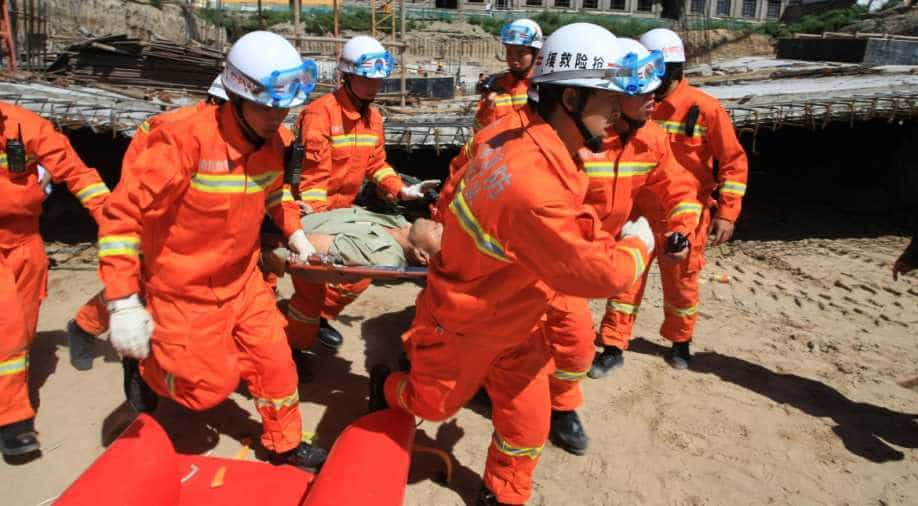 Pictures of the scene in Fengcheng, in the central province of Jiangxi, showed a grey mass of concrete slabs, steel girders and twisted metal splayed in a heap on the ground inside a large round structure. (Representative image) Photograph:( Getty )

At least 67 people were killed when part of a power station under construction in China collapsed Thursday, state media reported, the latest industrial accident in a country with a dismal safety record.

A cooling tower platform plunged to the ground in the early hours, trapping an unknown number of people beneath it, the official Xinhua news agency said.

State broadcaster CCTV put the toll at 67, with local reports saying one person was still missing and two others injured.
Pictures of the scene in Fengcheng, in the central province of Jiangxi, showed a grey mass of concrete slabs, steel girders and twisted metal splayed in a heap on the ground inside a large round structure.

Hard-hatted rescue workers in neon jumpsuits carried bodies out from the site on stretchers wrapped in orange sheeting.

A total of 32 fire engines and 212 military personnel had been deployed to the scene, the Jiangxi provincial fire department said on a verified social media account.

The construction of two 1,000-megawatt coal-fired power units at the Ganneng Fengcheng power station began last July and was expected to be completed by early 2018, the local Yichun city government said on a verified social media account last year.

The main investor for a previous expansion project at the plant suspended trading in its shares on the Shenzhen stock exchange Thursday afternoon, stating that "significant events" that could not be disclosed could impact its share price.
Its shares had fallen 3.41 percent by midday.

Industrial accidents are common in China, where safety standards are often laxly enforced.

In August a pipeline explosion at a coal-fired power plant in the neighbouring province of Hubei killed 21.

Earlier this summer more than 130 people were taken to hospital after chemicals leaked from a plant in eastern China.

In April a chemical fire burned for 16 hours in the coastal province of Jiangsu after an explosion at a facility storing chemicals and fuel, requiring 400 firefighters to quell the flames.

Last December, the collapse of a gypsum mine in the eastern province of Shandong left one person dead and 13 others unaccounted for, with four miners only rescued after being trapped underground for 36 days.

A total of 19 people had been found responsible for the incident, Xinhua said Thursday, with three managers arrested and 16 other local officials "punished". The agency did not give further details.

The owner of the collapsed mine committed suicide by drowning himself at the scene soon after the collapse, Xinhua said.

He will not be subject to criminal liabilities, it cited investigators as saying.