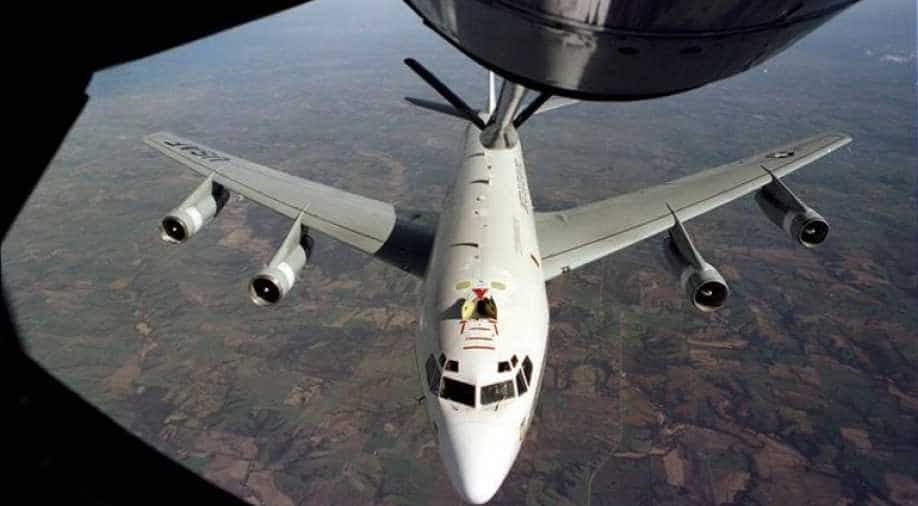 A US Air Force WC-135 Constant Phoenix aircraft is refuelled from an air tanker in an undated photo. Photograph:( Reuters )

The US that the plane, a WC-135 Constant Phoenix, was conducting a 'routine mission' in international airspace when it was intercepted by 2 Chinese Sukhoi SU-30 fighter aircraft||China has asked US to halt such reconnaissance exercises to prevent future incidents||

China has denied US allegations that two Chinese fighter jets acted unprofessionally in intercepting an American military plane earlier this week, saying that its aircraft were acting in accordance with the law".

"Related remarks from the US side are inconsistent with fact," the Chinese Ministry of Defense said in a statement posted to its website late Friday.

"On May 17, a US reconnaissance aircraft was carrying out an operation in airspace over the Chinese Yellow Sea (the northern part of the East China Sea), and Chinese aircraft acted to identify and investigate in accordance with the law," the statement said, calling the action "professional" and "safe".

The US Air Force said in an earlier statement Friday that its plane, a WC-135 Constant Phoenix, was conducting a "routine mission" in international airspace when it was intercepted by two Chinese Sukhoi SU-30 fighter aircraft.

The WC-135 is a so-called "sniffer plane" designed to scan the atmosphere for signs of nuclear activity.

"The WC-135 was operating in accordance with international law. While we are still investigating the incident, initial reports from the US aircrew characterised the intercept as unprofessional," the Air Force said.

The statement out of Beijing came as Chinese State Councilor Yang Jiechi discussed preparations for the first round of the China-US diplomatic and security dialogue in a phone conversation Saturday with US Secretary of State Rex Tillerson.

China's Ministry of Foreign Affairs noted in a statement that Yang and Tillerson "exchanged views... of common concern such as the Korean Peninsula," but did not say whether the aircraft incident was discussed.

Mid-air interceptions occur routinely in international airspace, but the US military will often call out foreign pilots if it judges the manoeuvres to be risky or unprofessional.

Meanwhile, China urged the US to halt such reconnaissance exercises in order to prevent future incidents.

"The American military's frequent reconnaissance operations are the root cause of security issues between the Chinese and US navy and air forces," the Chinese defence ministry's statement said.