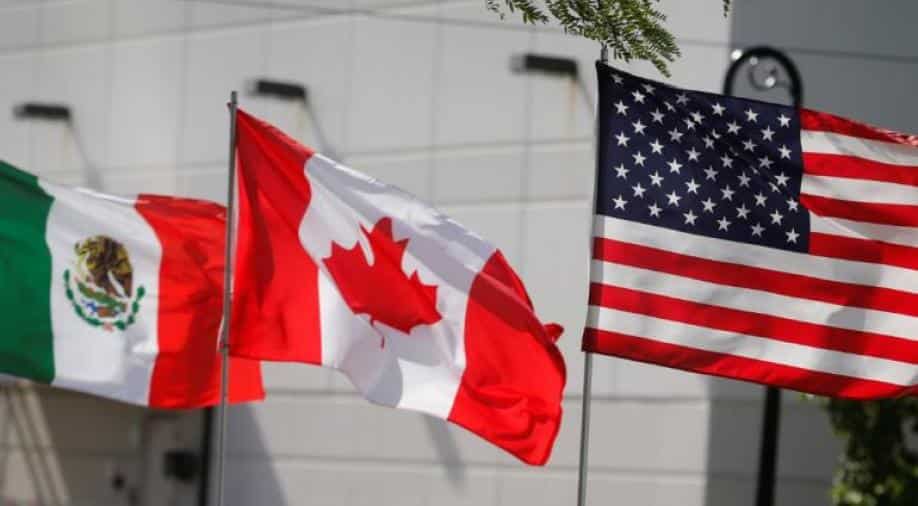 Canadian Foreign Minister Chrystia Freeland said on Friday that her team is 'not there yet' in resolving still big differences.

Talks between Canada and the United States to update the North American Free Trade Agreement soured sharply on Friday after President Donald Trump reportedly said a pact would be on US terms and Ottawa stood firm against signing "just any deal."

US Trade Representative Robert Lighthizer and Canadian Foreign Minister Chrystia Freeland resumed the increasingly fraught talks on Friday, with Mexico on standby to return to discussions aimed at ending a year of hard-fought negotiations on the three-way North American Free Trade Agreement.

But Trump said in off-the-record remarks to Bloomberg News this week that any trade deal with Canada would be "totally on our terms," the Toronto Star reported on Friday, citing remarks it had obtained.

Canadian stocks turned lower following the Toronto Star report, dropping to a two-week low, and the Canadian dollar weakened. Global equities were also down following the hawkish turn in Trump's comments on trade.

On the record, Trump told Bloomberg in the interview that a deal was "close" and that it could happen on Friday, the deadline he set to allow outgoing Mexican President Enrique Pena Nieto to sign it before he leaves office at the end of November.

Under US law, Trump must wait 90 days before signing the pact.

But Canadian Foreign Minister Chrystia Freeland said on Friday her team is "not there yet" in resolving still big differences.

"We're looking for a good deal, not just any deal. And we'll only agree to a deal that is a good deal for Canada," Freeland told reporters.

Lighthizer has refused to budge despite repeated efforts by Freeland to offer some dairy concessions to maintain the Chapter 19 independent trade dispute resolution mechanism in NAFTA, The Globe and Mail reported on Friday.

However, a spokeswoman for USTR said Canada had made no concessions on agriculture, which includes dairy, but added that negotiations continued.

The United States wants to eliminate Chapter 19, the mechanism that has hindered it from pursuing anti-dumping and anti-subsidy cases. Lighthizer said on Monday Mexico had agreed to cut the mechanism. For Ottawa, Chapter 19 is a red line.

"It's dairy versus the Chapter 19 settlement," one source familiar with the talks told Reuters.

Trump argues Canada's hefty dairy tariffs are hurting US farmers, an important political base for his Republican party.

But dairy farmers have great political clout in Canada too, and concessions could hurt the ruling Liberals ahead of a 2019 federal election.

On Friday, Canadian Prime Minister Justin Trudeau hit back at Trump, saying his country would not compromise on the supply management system that protects dairy farmers.

"The US subsidizes its producers, giving them hundreds of thousands of dollars a year," he said in Oshawa, Ontario.

All three countries have stressed the importance of NAFTA, which governs billions of dollars in regional trade and a bilateral deal announced by the United States and Mexico on Monday paved the way for Canada to rejoin the talks on Tuesday.

The new NAFTA that is taking shape will likely strengthen North America as a manufacturing base by making it more costly for automakers to import a large share of vehicle parts from outside the region.

New chapters governing the digital economy and stronger intellectual property, labour and environmental standards could also work to the benefit of US companies, possibly helping Trump to fulfil his campaign promise of creating more American jobs.

"These are the tense moments of end-game negotiations," Brian Kingston, vice-president for international affairs at The Business Council for Canada, and industry group in close contact with Canadian team.

"There will be moments when it looks like there's an impasse, but we may find ourselves with an agreement this afternoon."

Trump also hinted at flexibility over his Friday deadline in the Bloomberg interview. "Canada's going to make a deal at some point. It may be by Friday or it may be within a period of time," he said.

Juan Pablo Castanon, head of the umbrella group representing Mexico’s private sector in the NAFTA talks, told local radio MVS on Friday that there will be meetings between representatives of all three countries later in the day.

"Today the meetings will be trilateral looking at scenarios to conclude the talks,” he said from Washington, adding: "Details on an agreement are still missing."