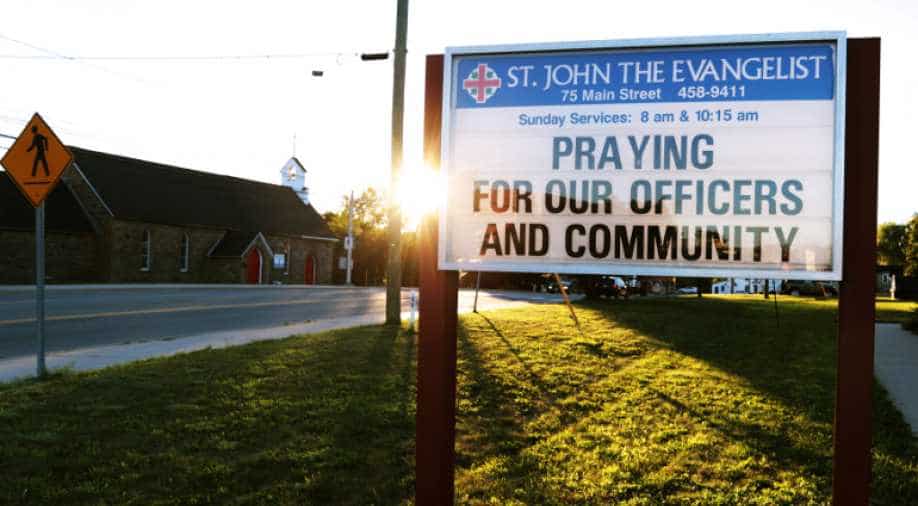 A message at the St. John the Evangelist Anglican Church notifies the community of a prayer vigil after a shooting incident in Fredericton, New Brunswick, Canada. Photograph:( Reuters )

The man behind a fatal shooting in an eastern Canada city has been charged with four counts of first-degree murder, police said Saturday.

Raymond, who was injured and hospitalized, was charged with four premeditated homicides, though police did not provide details of his motives.

He will remain in custody as he awaits a court appearance slated for August 27, Fredericton police said in a statement.

On Friday authorities in the provincial capital -- about 75 kilometers (45 miles) from the border between Canada and the US state of Maine -- had identified the two officers killed as Lawrence Robert Costello, 45, and Sara Mae Helen Burns, 43.

Police said the man used a rifle and fired from the third floor of a small building in a residential area of the city, which has some 60,000 residents.

Fitch said police "have nothing to indicate that police were targeted" in the shooting, and that when they responded to reports of shots fired the two citizens were already fatally wounded.

The incident sparked panic in the city as Canada grapples with rising gun violence, with some calling for a handgun ban.

The mass shooting is the second in the province in recent years and comes only weeks after a man opened fire on July 22 in a bustling Toronto district, killing an 18-year-old woman and a 10-year-old girl while wounding 13 other people.

In 2014, three federal police officers were killed and two more were injured after responding to an emergency call about an armed man roaming a residential neighborhood of nearby Moncton, New Brunswick.

A 28-hour manhunt ensued before police caught up to the suspect and arrested him, in what was described as the second-deadliest attack on Canadian police since four Royal Canadian Mounted Police officers were ambushed on a Mayerthorpe, Alberta farm in 2005.