California's raging wildfires cause another death 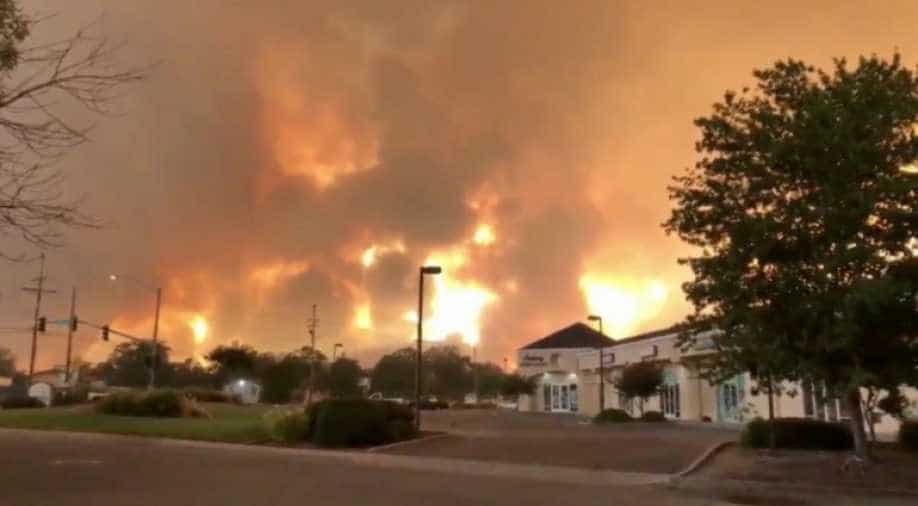 Smoke and flames are seen as a wildfire spread through Redding, California, the US. Photograph:( Reuters )

California's deadly Carr wildfire -- now the state's sixth most destructive -- has claimed another life with a power linesman killed on the job its seventh fatality, officials said Sunday.

Its intensity was so great at one point, that it generated a tornado-like whirl of fire -- as well as its own weather system.

PG&E power company identified the worker Sunday as Jairus Ayeta, who was killed in a remote area of Shasta County where crews were working to restore electricity.

"The safety of our employees and our customers is PG&E's top priority. Our thoughts and prayers are with our fallen team member, his family and our extended team," the company said in a statement.

"We are working with law enforcement to investigate the circumstances of the incident," it added.

The Carr Fire has scorched 154,524 acres (62,534 hectares) of land since July 23, when authorities say it was triggered by the "mechanical failure of a vehicle" that caused sparks to fly in tinderbox-dry conditions.

The fire has also razed more than 1,600 buildings, including some 1,000 homes, making it the sixth most destructive blaze in the history of the fire-prone western state, state officials say.

More than 4,200 firefighters have been deployed to battle the conflagration but they have only succeeded in containing 41 per cent of it so far.

Other fires raging in the state include the Mendocino Complex, comprised of two blazes: the River Fire and the Ranch Fire.

Several thousand people have been evacuated as the fires swept across the state, although some have been given permission in recent days to return to their homes.

President Donald Trump blamed the fires' destruction on "bad environmental laws," but did not mention evacuees or victims of the inferno.

"California wildfires are being magnified & made so much worse by the bad environmental laws which aren't allowing a massive amount of readily available water to be properly utilized," he tweeted.

"It is being diverted into the Pacific Ocean. Must also tree clear to stop fire spreading!"

The US president drew international outrage last year after withdrawing the United States from the Paris climate change pact that is aimed at combatting global warming.