Brexit on the menu at May, Macron meeting 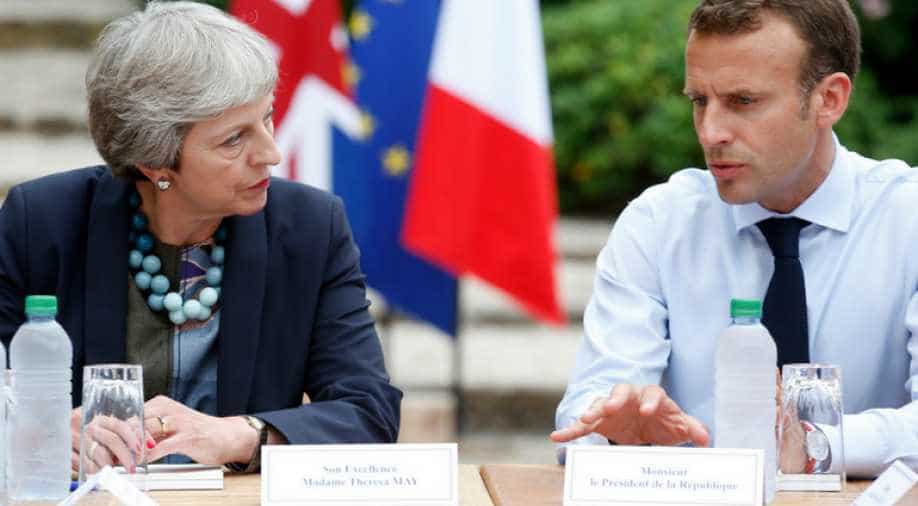 French President Emmanuel Macron welcomed British Prime Minister Theresa May to his "summer Elysee Palace" on the Mediterranean coast on Friday, for talks on a Brexit plan which has upended May's government and so far failed to win over sceptical EU negotiators.

Macron arrived late afternoon at &nbspBregancon, a 17th-century fort long favoured by French presidents as a summer retreat, and May an hour later for an "informal" meeting between the two leaders, followed by a dinner with their spouses.

"The plan was to go to Bregancon, which is to be a summer residence but also a place for working, and since May was finishing her vacation in Italy we proposed hosting her here," a source in Macron's office said.

May is going to lay out "London's position on the Brexit talks and its future relations with the EU," the source said. "It will be the occasion to clarify this proposal and discuss the political context."

There will be no press statement afterwards, because "there is absolutely no intention to speak in place of Michel Barnier," the EU's designated Brexit negotiator, the source added.

Pressure is growing on May to win allies on the continent after her "Chequers plan" prompted two top ministers in her cabinet to resign in protest last month.

The prime minister has just a few months before an agreement on Britain's divorce from the European Union -- set for March 29, 2019 -- must be forged in principle ahead of a EU summit in mid-October.

Barnier has already shot down May's proposed solution to keeping the frontier between the UK and EU member Ireland open without a "hard border".

Under May's proposal a dual system of taxation would be introduced which would see taxes levied by each side of the Irish border for the benefit of the other.

Bank of England Governor Mark Carney told the BBC on Friday that the risk of a no-deal Brexit was "uncomfortably high" as talks entered a "critical phase".

Before heading to Bregancon, May spoke by telephone Friday with EU Commission chief Jean-Claude Juncker on Brexit as well as trade in light of the tariffs dispute with the United States.

Juncker's spokeswoman Natasha Bertaud added that "our chief negotiator (Barnier) has neither hardened nor softened his position. It remains constructive, as it always has been."

"There is nothing threatening about May's shuttle diplomacy. This is to be expected and it's normal that she is trying to smooth things out," an EU diplomat in Brussels said on Friday.

"But Brexit remains Brexit. It's the same stuff over and over again. There are the same red lines."

European leaders have steadfastly voiced support for Barnier, who wrote in a piece published in French and German newspapers Thursday that Britain and the EU "are 80 per cent in agreement on an exit deal."

"But 80 per cent is not 100 per cent," he warned. "Let's be frank, the United Kingdom, having decided to leave the single market, cannot be as economically close as the rest of the EU."

France is seen as taking a particularly hard line in the Brexit negotiations, especially on financial services, with Paris already expecting to get about 3,500 new banking jobs as leading players to move operations out of London.

Companies in other sectors have also warned they might move operations out of Britain, which could prove a boon for economies on the continent.

Barnier has maintained that any Brexit accord "must conform with the economic interests of the 27 remaining EU members, and the president has always supported this as well", the source in Macron's office said.

But Macron also wants to avoid a "messy divorce", which Britain's foreign minister Jeremy Hunt has warned will happen in case of a "no-deal exit".

"France and Germany have to send a strong signal to the Commission that we need to negotiate a pragmatic and sensible outcome that protects jobs on both sides of the Channel," Hunt said in a British press interview before visiting Paris and Vienna this week.

But a statement released by Loiseau's office Friday said she had "reiterated France's full support for Barnier and the remarkable work he is doing."